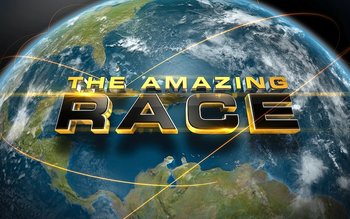 "The world is waiting for you. Good luck. Travel safe. Go!"
— Phil Keoghan, starting off every season.
Advertisement:

Emmy-winning Reality Show created by Elise Doganieri and Bertram van Munster and airing on CBS since September 5, 2001. Hosted by Phil Keoghan, the show could vaguely be considered the Reality Show version of Around the World in 80 Days.

Eleven teams of two peoplenote Though four seasons have featured twelve teams (Seasons 3, 4, 10, and 15), while Season 8 featured ten teams of four go on a journey around the world, following clues and performing tasks in order to find their way to the designated Pit Stops; the last team to arrive is usually (but not always) eliminated.

The most common types of tasks that the racers must perform along the way:

A few seasons of the American show have had gimmicks applied to their setup:

The show has done well with both critics and fans, with the possible exception of the aforementioned Family Edition, which sacrificed exotic world locales and interpersonal drama for a competitive family road trip.

The Amazing Race, like all reality shows, consists of a camera crew following the teams as they race across the globe; accordingly, for legal and political reasons, all participants must be U.S. citizens, and legally able to travel outside of the U.S. The show is much less frustration-wrought than, say, Survivor — less emphasis is placed on knocking the other team out of the proverbial race, which allows for a more 'relaxed' atmosphere while showcasing some of the absolutely gorgeous scenery and geography in many of the world's most exotic countries.

Heck, it's even mildly educational, owing to the fact that some of the clues require calculation, riddle- and puzzle-solving, and a passing familiarity with the notable landmarks in a given country.

In 2020, the COVID-19 Pandemic halted the many versions of the show from filming, as the world suffered from global spread of the disease and made it unsafe to travel and saw many countries cracking down on who could come and go. The American version had filmed two legs in the UK and Sweden in February before production halted and everyone was sent home. Van Munster has said they’re planning on just returning the cast and picking back up where they left off when it’s safe to resume production. The Australian version was the first one to resume production (due to the country's relative success in stopping the flow of the virus via lockdowns and travel restrictions) but stuck to a domestic only route. The US version resumed production in September 2021. They decided to pick off where they left off but changed the route to stay mostly in Mediterranean Europe since it has high vaccination rates and good enough weather to keep the race outside as much as possible.

Not to be confused with Amazing Freaking Grace, though that hasn't stopped some from making that pun anyway.

Fittingly, other countries have produced their own versions of the show.

List of Series
Note: Tropes relating to the series or teams in general go here. Tropes and examples specific to certain teams should be placed on their respective character pages.