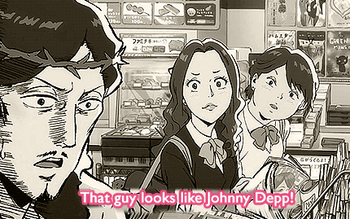 Or you could say Johnny Depp Looks Like Jesus...
"Your face is familiar..."
— Arsenic and Old Lace (repeatedly said to the villain, originally played by Boris Karloff)

Whenever a resemblance is noted In-Universe between a celebrity and someone else.

It's a relatively common phenomenon. Some people do look alike, but since celebrities have such well known faces, people tend to see their resemblances in other people.

In magazines, this is often poked fun at with side by side photos of celebrities with people who resemble them, often with the caption "Switched at Birth?", and often with the labels swapped.

In a brilliant bit of Refuge in Audacity, Albert Einstein would invoke this to anyone who approached him in the street, asking him to explain his theories. He would reply "Pardon me, sorry! Always I am mistaken for Professor Einstein." More likely this was probably just a joke, since Einstein had a thick German accent the moment he spoke it would be obvious he was the genuine article. But, even within his lifetime his name had become synonymous with the word "genius". People not familiar with the history of physics both in Einstein's time and today think that he must have been especially intelligent in order to discover general and special relativity. In reality, all the groundwork had been laid for him by other scientists: and he made the discovery-as opposed to someone else-more because he had a lot of time to think about it than because he was especially smart. Basically, even within Einstin's lifetime who people thought he was bore very little resemblance to who he actually was.

It can be helpful for actors trying to break into Hollywood to already have this aspect. Some casting agencies will be asked by studios to look for someone who looks like [whatever] celebrity. Similarly, some writers and artists intentionally design fictional characters off of real life celebrities.

Although the audience can definitely feel that a certain character, actor or actress resembles a celebrity, this trope only applies if this resemblance is mentioned or purposely exploited in a work.

Might overlap with Celebrity Paradox if said celebrity appears in the work.

A Sister Trope to Celebrity Impersonator (when someone outright tries to look like one).

Not to be confused with Identical Stranger, No Celebrities Were Harmed (basing characters off celebrities).