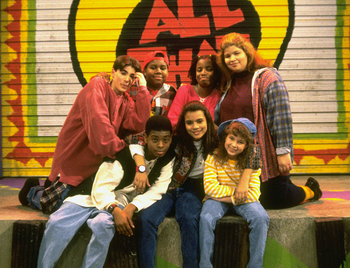 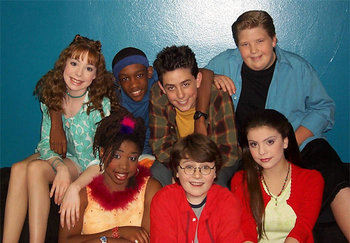 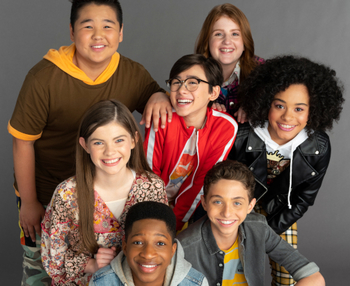 Nickelodeon's third ensemble skitcom (following You Can't Do That on Television and Roundhouse), bearing a strong resemblance to the format of Saturday Night Live or MADtv (like its predecessors did to Rowan and Martin's Laugh-In and In Living Color!, respectively).

Created by Brian Robbins and Mike Tollin and produced by Dan Schneider. Ran from April 1994 to October 2005 — a little more than a decade, complete with a full cast exodus about halfway through, followed by four seasons, again like SNL... but without an Eddie Murphy-type cast member to keep things afloat until Lorne came back, which in this case "he" (Mike Tollin & Brian Robbins) never did... at least not until much later.

Launched the careers of: Amanda Bynes (who starred in What I Like About You and several films before retiring from acting due to mental health issues), Kenan Thompson (who actually managed to make the cast of Saturday Night Live in the mid-2000s and is now the longest-running cast member in the show’s history), Kel Mitchell (who auditioned for SNL around the same time as Kenan Thompson, but never made it, disappointing a lot of old-school Nick fans who wanted to see Kenan and Kel do sketch comedy together again), Nick Cannon, Gabriel Iglesias, and Jamie Lynn Spears. Also launched Dan Schneider into being a major behind-the-scenes headliner for Nickelodeon and arguably, the wave of dueling tween/teen KidComs on both Nickelodeon and Disney Channel.

In 2019, Nickelodeon premiered the second revival of All That, spear-headed by Brian Robbins (newly-installed as President of Nickelodeon) with a brand new cast and with Kenan Thompson and Kel Mitchell serving as executive producers. This was derailed by the COVID-19 Pandemic, and the revivial is on hiatus, future unknown.

Led to (chronologically): KaBlam!, Kenan & Kel, The Amanda Show, The Nick Cannon Show, Zoey 101, and Just Jordan. And further down the family tree came Drake & Josh and eventually iCarly, Victorious and Sam & Cat. The 2019 revival would have its own spin-offs: Drama Club (with Nathan Janak as part of the main cast), That Girl Lay Lay (with Gabrielle Green as part of the cast) and Warped! (starring Kate Godfrey).

The NickRewind block on TeenNick was originally named "The '90s Are All That" for it, and thus served as its headliner.

Advertisement:
Cast Members, Past and Present

(After this, "Jutjitsu move" becomes one of Principal Pimpell's catchphrases)

Coach Kreeton: "Jujitsu move"? (Tandy spins Coach Kreeton around and kicks him out of the window)

(Mavis and Clavis call for Run DMC, whose members then appear on stage as well)

Lori Beth: Run DMC?
Angelique: They're your nephews?
Clavis: Well, you see, Run is the grandnephew of my cousin Gertris.
Mavis: Yeah, and DMC? He's my next-door neighbor's brother's cousin's chiropractor.
Clavis: Mm-hmm. And, see, we don't know who Jay is.
Mavis: Yeah, but he looks like a fine young man; now, watch your head there, boy.
Clavis: Hey, boy, watch your mouth. Don't talk back to him.
Mavis: Now, if we gonna have some Christmas singin', I suggest we let Run DMC do it.
DMC: Word up; we gonna take that Christmas song and flip it to our style.

Jerry Futile: You spoke out of turn; that's a penalty of 5,000 points, Antoine!
Antoine: But I haven't got any points.
Jerry Futile: AND YOU NEVER WILL! -5,000 for Antoine!

He should have said, "I'd like to ask you this question".

Ms. Hushbaum: I DID IT! I HIT THE BELL! I'M THE MIGHTIEST LIBRARIAN IN THE LAND!
Other character (Amanda Bynes): You're mighty...loud!
Buford: One time, a tick bit me in my butt.
Betty Jo: Quit! Bragging! Moron!
Buford: Oh, Pa, Betty Jo done called me a moron.
Clem: Betty Jo, don't call your brother a moron.
Buford: You tell her, Pa.
Clem: Shut up, moron.