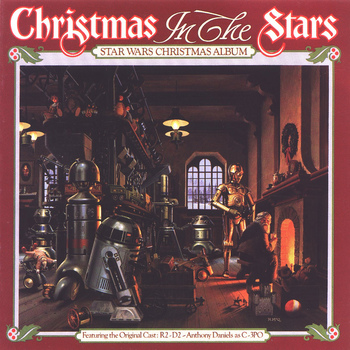 Eh, they had a holiday special, why not an album?
"All of a sudden there comes Christmas, and there is an absolute tidal wave of darling little girls and sweet little boys making millions of dollars on records singing enchanting little Christmas songs that are perfectly nauseating."
— Anna Russell
Advertisement:

Long ago, back in the days when sales of vinyl singles really did control the position of songs in the charts, Christmas was a time when glurge-laden seasonal ditties dominated those charts for weeks on end, as parents and grandparents purchased them for children (and vice versa). Even now, these tunes are virtually ubiquitous on the radio (as as well as in stores, malls, and practically every other place with a PA system) every November and December. Sure, every so often somebody will pen an Anti-Christmas Song as an antidote, but the only real way to escape the onslaught is to become a Hikikomori—or go off the grid entirely—for at least two months each year.

Nonetheless, almost everyone's got that favorite album that they will lovingly pull out from the bottom of the cabinet when the end of the year rolls around. Despite the many cheap, irritating, and soulless renditions (and re-renditions, and re-re-renditions ad nauseam) to be heard all over the place during the holiday season, the original simple melodies are still there, just waiting to be heard and to remind us why these songs really are merry and bright. And for those who really like this stuff, at least one radio station in almost every town switches to all Christmas music all the time on December 1 (if not earlier). In other words, when done right, these are still indisputably Awesome Music.

Trivia: If you listen closely, you might notice that quite a few supposed "Christmas songs" have little if anything to do with Christmas at all. "Jingle Bells", "Jingle Bell Rock", "Winter Wonderland", "Sleigh Ride", "Frosty the Snowman", "A Marshmallow World", "I've Got My Love to Keep Me Warm", and "Baby, It's Cold Outside" are technically just songs about winter and never even mention any specific holiday; the latter two would really work just as well on Valentine's Day. But after many, many, many years of Pop-Cultural Osmosis, these tunes will forever be tied to Christmas, even in those places where it doesn't snow in December.

From a marketing standpoint, you can understand why someone would want to make a Christmas album. If you can create a successful hit that will get played each and every year, you can keep the money rolling in for decades. "Jingle Bells" was written in 1857, and several others date back to the 1930s, '40s, and '50s. And yet, all of these songs—in contrast to just about anything else of similar antiquity—are guaranteed to get airplay and sales every December. xkcd breaks it down with this graph

Christmas Carolers will frequently be singing these, as you might expect. The Grinch, meanwhile, may counter with an Anti-Christmas Song.

Yes, you are going to hear Snowy Sleigh Bells. This is simply a fact of life. Cherubic Choirs are also a staple.

Also, at the risk of being pedantic: Christmas carols, properly defined, are mostly songs celebrating the religious festival; originally folk songs for dancing, the term now includes Christmas hymns and the ever-growing number of newly composed carols, sung in church, at concerts and elsewhere.

Interestingly, a surprisingly high percentage of popular 20th-century Christmas songs were composed by Jewish songwriters. Make of that what you will.

Christmas Albums with their own trope pages:

open/close all folders
Straight
Melancholy
Parody/Humorous
Glurge-laden
These are very much YMMV. One person's Glurge is another person's Crowning Moment of Heartwarming. Please don't natter about how you disagree with an entry.
Other
Feedback