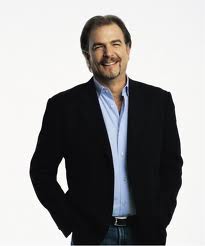 William Ray Engvall Jr. (born July 27, 1957) is a stand-up comedian and actor from the state of Texas. He is best known for his "Here's Your Sign" jokes, in which he states that people who ask stupid questions should be given signs that say "I'm Stupid" so you won't rely on them. Of course, he has a snappy rejoinder to the stupid questions asked of him.

Engvall rose to prominence in the 1990s alongside fellow comedian, close friend and labelmate Jeff Foxworthy. The two experienced a second wind of popularity when they partnered with Larry the Cable Guy and Ron White to form the Blue Collar Comedy Tour. He had his own sitcom, The Bill Engvall Show, which aired on TBS for three seasons. The show co-starred Nancy Travis and Jennifer Lawrence.

Also like Foxworthy, Engvall has added game show host to his résumé: he took over as the host of GSN's Lingo on June 6, 2011.

He now hosts a podcast, which can be found on his website.

In 2021, he announced his retirement as a touring comic, saying he wishes to spend more time with his family.