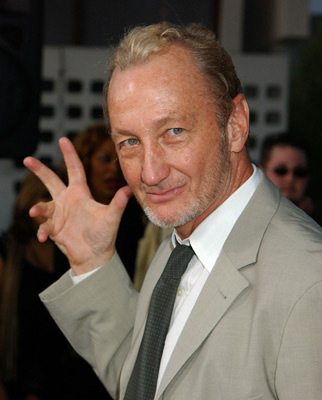 "The truth of it is when you get an audience to laugh and camp along with you, it's much easier to scare 'em again because they're using two sides of their emotions. It's much easier to set them up for a good cheap thrill scare again."
Advertisement:

Robert Barton Englund (born June 6, 1947 in Glendale, California) is a classically trained actor, who primarily works in film and television.

He became famous for his contributions to horror genre, most notably with the role of Freddy Krueger in A Nightmare on Elm Street films.

However, he first hit the big time as the lovably innocent Willie in the V (1983) franchise. This created a TV image strong enough that when Freddy's Nightmares had an Origin Story story for Krueger, Englund's face was largely obscured to avoid associations with Willie.

Also, he and three others once fought a zombie-fied George A. Romero.