Film / A Nightmare on Elm Street 4: The Dream Master 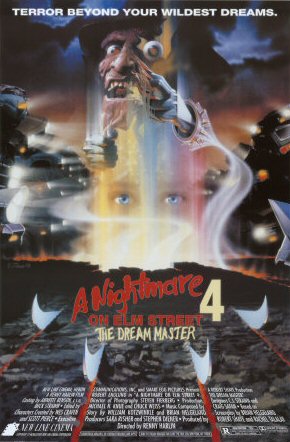 "Now I lay me down to sleep
The Master of Dreams my soul will keep
In the reflection of my mind's eye
Evil will see itself, and it shall die"
— The Dream Master rhyme
Advertisement:

Despite the Dream Warriors' best efforts, Freddy Krueger returns from his grave to continue invading the dreams of others. After quickly dispatching the survivors of the last film, Freddy makes Kristen involuntarily pass her dream abilities on her schoolmate Alice, so that he can extend his cruelty past Elm Street. Alice now has to find a way to defeat Freddy before she loses all of her friends and loved ones.

Critical reception was mixed, but it did so well on the box office it became the most successful Slasher Movie of the 80s. It was the most financially successful movie in the Nightmare series until Freddy vs. Jason came out.