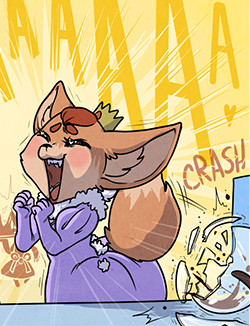 "A shock wave struck while one young lady was performing at the recent Youth Folk-Singing contest, doing damage to the venue. Fortunately no one was injured."
— Sunken Scroll 1note The singer in question being a young Pearl, Splatoon 2
Advertisement:

Sound is a vibration, which can be transmitted to a physical object, such as glass. If the pitch of the sound matches the natural vibration frequency of the object, and if the volume of the sound is loud enough, then the resulting vibration can cause the object to break. In the case of glass (usually wine crystals), the notes that cause resonance vibration are rather high-pitched.

As a result, shattering glass has become a fictional shorthand for indicating that a sound (often someone singing) is particularly loud or high-pitched, or otherwise to indicate that they're a terrible singer (an acoustic analogue to Mirror-Cracking Ugly)... or alternatively, a really good singer, confusingly enough. (The last one is probably the closest to reality, as the singer would have to match the exact frequency of the tone that the glass makes when struck and create destructive resonance by holding the note long enough. Not a feat many people can pull off. As Mythbusters demonstrated, it also requires being extremely close to the glass, so Don't Try This at Home.)

Sometimes coupled with Dramatic Shattering. Compare Make Me Wanna Shout, which covers all-purpose (i.e. not limited to brittle materials) sonic attacks. Related to Gale-Force Sound, which affects things other than glass. Frequently happens at the performances of a Dreadful Musician or an operatic Brawn Hilda.