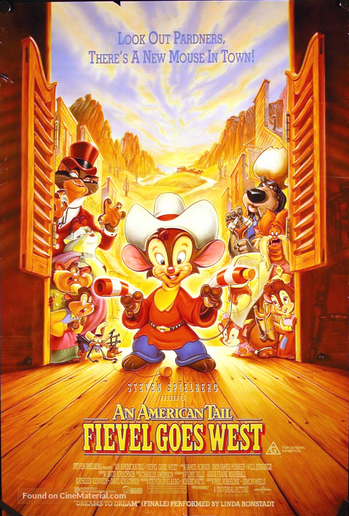 Picking up some years after the events of the first film, the Mousekewitz family are disillusioned with living in New York, with the final straw being a cat attack on their alley home. After the villain, Cat R. Waul, tricks them and a crowd of other mice into buying train tickets to a small town in the West via using a mouse puppet, the family boards a train to the Wild West. But, echoing the tone of disillusionment in the first film, it turns out the town of Green River is a Dying Town, and Cat R. Waul had more nefarious motives for bringing the mice there. Fievel is the only one who overheard Waul's plans, and no one who will believe him except for a washed-up former hero sheriff, Wylie Burp (voiced by none other than James Stewart in his final film role).

The film marked the debut of Amblimation, the newly-created animation arm of Steven Spielberg's studio Amblin Entertainment. Directing duties were handed to Phil Nibbelink and Simon Wells rather than Don Bluth, who had produced the first film with Spielberg, kicking off the trend of sequels to Don Bluth films which he had absolutely no involvement in (the glut of Land Before Time sequels was only three years away). Due to Spielberg's popularity and the franchise being more closely associated with him than Bluth, this is also one of only two sequels to a Bluth film to receive a theatrical release rather than be Direct to Video (the other being All Dogs Go to Heaven 2).

The break-off from Bluth, combined with Spielberg having just produced the slapstick-heavy Who Framed Roger Rabbit, resulted in this film being significantly less bleak and more comedic in tone than the original. The later direct-to-video sequels throw a veil doubt over the canonicity to the original, with the Mousekewitz family living back in New York and Fievel mentioning he "dreamed" that he moved west, but the truth of the matter seems to have been left up to Fanon.

Wylie Burp tries teaching Tiger on how to be a dog in order to defeat Cat R. Waul and his gang, this showcases Tiger's buffoonery being the comic-relief and provides the page image.

Wylie Burp tries teaching Tiger on how to be a dog in order to defeat Cat R. Waul and his gang, this showcases Tiger's buffoonery being the comic-relief and provides the page image.