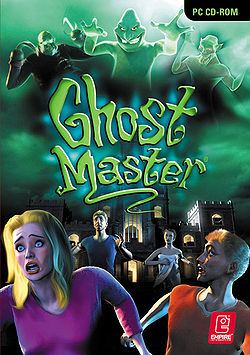 A PC strategy/puzzle game from 2003 from where you take on the role of an undead civil servant, a Ghost Master in charge of a group of ghosts tasked with scaring the living for a variety of reasons.

There are ghosts of people, animals and even general feelings, each with their own powers. These are further divided into Elementals, Frighteners, Sprites, Vapors and Horrors.

Each ghost has its own 'Fetters' or objects/areas they can be attached to while in the mortal world.

Missions involve scaring 'mortals' or tricking them into doing you bidding. It's not that simple though: to scare effectively you need to work out what the mortals fear, their conscious and unconscious fears as well as what is likely to rattle them enough to cause them to go insane.