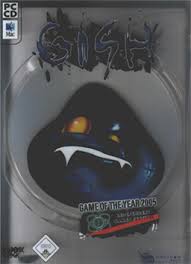 Meet the protagonist.
"Life isn't easy when you're a 12-pound ball of tar."
— Game description
Advertisement:

Gish is a 2D platforming game released in 2004 for the PC. You control an amorphous tar ball character called Gish. Gish doesn't have limbs, so he has to navigate the environment in a different way.

Gish has four abilities: sticky, slick, heavy and expand. Becoming sticky allows Gish to stick onto most surfaces and grab objects, becoming slick helps him to squeeze through tight spaces and become frictionless, becoming heavy allows him to break things from above and fall down faster, and expanding helps him to jump and avoid falling damage. Gish can use those abilities as long as he wants, and he can use several abilities at once.

The game has 5 worlds. The first 4 have 5 normal levels followed by a boss level followed by a level where transportation is a key. The last world is a bit different. The game also features a level editor so people can make levels ranging from challenging to downright sadistic.

Gish also got a mobile phone port where the storyline continues from the ending of the PC game. It also features co-op mode.

Gish has shown up in other Edmund McMillen games: He is a playable character in Super Meat Boy, and a boss fight in The Binding of Isaac.

Not to be confused with the D&D slang for a Magic Knight, or the first album by The Smashing Pumpkins.