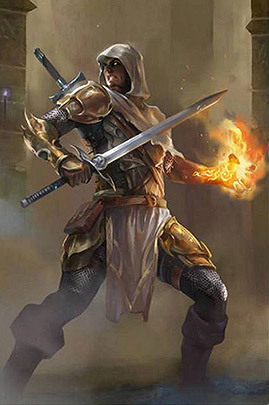 Giving new meaning to the term Sword and Sorcery.
"Able to resolve most conflicts with either spell or sword.
They are a deadly mix of scholar and soldier."
— In-game description of the Battlemage class, The Elder Scrolls IV: Oblivion
Advertisement:

Most mages are of the Squishy Wizard variety, able to work eldritch wonders but not take a punch. And most warriors are Magically Inept Fighters, able to deal and take devastating damage, but their range is limited to the length of their weapon and they'll have trouble with problems they can't bludgeon to death. But who said you can't have the best of both worlds? Whether they're wizards who picked up a melee weapon and some spiffy armor, or warriors who learned to cast a few spells, Magic Knights are every bit as deadly with both spell and sword.

For the purposes of game balance, the Magic Knight will either be weaker at sword and spell than a pure fighter or mage, generally slower, somehow otherwise limited to being defensive or offensive, or they'll be The Hero, who is expected to be the most powerful character anyway. Usually, the Magic Knights will specialize in a particular class of magic (attack or healing, for instance), effectively making them a hybrid of only two "classes", rather than being an out-and-out "Jack" of all trades. However, being a total Jack-of-All-Stats is also possible, depending on the game.

Another form of balance may be found in their spell loadout. Instead of the wide variety of spells a normal spellcaster can use, they tend to focus on Status Buffs and direct attack spells. Other typical abilities for this class may include infusing their bodies or weapons with elemental powers. Doing the same with Status Effects is not unknown either.

Older Than Print, as the Norse god Odin (who also made the Robe and Wizard Hat convention), was both a powerful wizard and an accomplished warrior.

The Paladin is a Magic Knight who's centered around Holy powers and fighting the forces of darkness. The Black Knight or Tin Tyrant may be one of these, usually with a focus of Necromancy and spells of darkness. Wizards that use their fists and feet instead of swords and shields go under Kung-Fu Wizard, Knights who use a bow instead of magic apply for Bow and Sword, in Accord, and those who favor firearms or a bow and arrow fall under Mage Marksman. Contrast Armor and Magic Don't Mix. A Magic Knight whose magic focuses on healing is a form of Combat Medic.

See also the Magical Girl Warrior sister trope/genre for magical girls who use magic, sparkly weapons, frilly armor, and The Power of Friendship and/or Love to kick evil's ass.