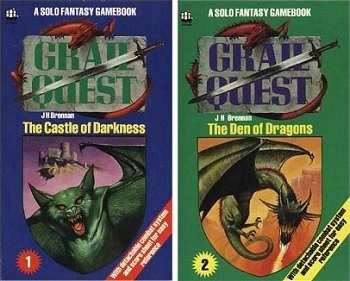 Hold still and don't fidget. See, Merlin (yes, that Merlin) has cast a spell on you, modern day reader, that will transport your mind back in time to the days of King Arthur and his court. See, they weren't quite as competent as the legends portrayed and someone (you) needs to save their bacon. Merlin's too busy.

You, in the body of sturdy farmboy (or possibly farmgirl) Pip, go forth to defeat the evil wizard, dragon, black knight, what have you; armed only with your dice, your spells (in some books), your talking sword; Excalibur Junior ("E.J", for short), and a lot of British humor.

GrailQuest is a set of Gamebooks by J.H. Brennan, with eight books in the series:

Not to be confused with The Grail Quest by Bernard Cornwell.

For other gamebook series by J.H. Brennan, check out Horror Classic Gamebooks and Sagas of the Demonspawn.