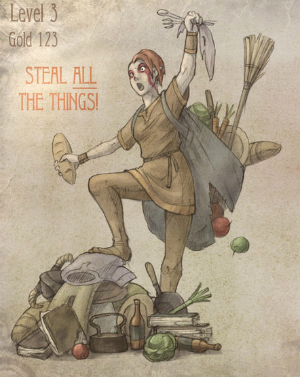 "Thank you, gentlemen! Someday, I will repay you! ...Unless, of course, I can't find you or if I forget."
— Shrek, Shrek 2
Advertisement:

As much as the motto for the FPS is, "If it moves, shoot it," the motto for the Adventure Game and Role-Playing Game is, "When it's dead, loot it." or "Take everything that isn't nailed down or too heavy, and anything that can be pried loose is not considered nailed down." (The latter advice appeared in the general strategy section of Infocom's manuals.)

When gaming began, and pretty much every game was Dungeon Crawling, this made sense. The hero was typically at least tangentially a treasure hunter, so looting ancient caverns was part of the job description.

When games started to move into different modern settings, though, the need to MacGyver up a solution to a puzzle from found items remained, and thus it stayed necessary to pick up everything you could find, especially since absolutely essential items were Permanently Missable unless you grabbed them while you still could. In populated environments, this makes the hero come off as a bit of a kleptomaniac. It doesn't help when the games, in an attempt to encourage the player to explore and Talk to Everyone, hides useful items here and there all over the towns.

Fortunately, hardly anyone ever notices. In fact, as you wander around the world, particularly in RPGs, you will repeatedly just waltz uninvited into every house in the town, smash the breakable items and loot it right before the owner's eyes, and simply be told "There are many guards in the castle." Be careful, though. You might just find something untoward...

Harry has been sent to Dumbledore's office, so obviously you're supposed to raid it for goodies.

Harry has been sent to Dumbledore's office, so obviously you're supposed to raid it for goodies.