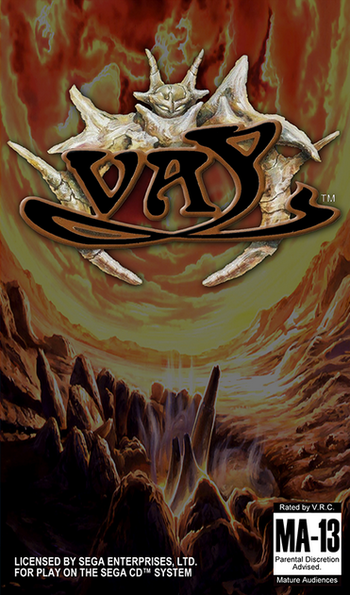 Vay (pronounced "Vī") is a role-playing game developed by Hertz and published for the Sega CD by Sims Co. (in Japan) and Working Designs (in the US). It was released in North America in 1994, a few months after the other big Sega CD RPG of the time, Lunar: The Silver Star. An iPhone port was released in 2008.
Advertisement:

A Long Time Ago, in a Galaxy Far, Far Away... a large suit of battle armor crash-lands on a distant inhabited planet called Vay, its guidance and vital systems severely damaged from fighting in a large-scale war. Although its pilot was killed during the conflict, the machine rampages across the battlefield, destroying everything in its path. It took the world's five most powerful wizards to subdue the machine and seal its power away in five magical orbs, which were promptly scattered and buried across the world.

Many years later, the young Lorathian prince, Sandor, is prepared to marry Lady Elin, with representatives from the four major kingdoms in attendance. Unfortunately for Sandor, his nuptials are cut short by a fierce attack by a swarm of robots from the rival Danek Empire, who kidnap Elin in the chaos. These mass-produced robots bear a striking resemblance to the battle suit that razed the planet long ago. Sandor, determined to rescue his betrothed from the Empire, soon learns that the suit is the only weapon powerful enough to strike back against Danek and its ruler, Emperor Jeal, and finds himself in a race against time to find the suit and the magical orbs needed to unlock its true potential.

NOTE: Many of the characters' names are translated differently for Working Designs' Sega CD version and SoMoGa's iPhone version. The names listed below are for the Sega CD version.