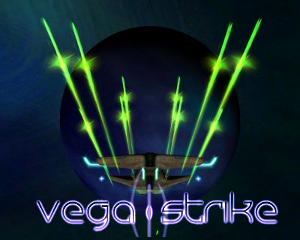 You want to be the one in that ship. Trust me.
Advertisement:

allows players to explore a vastly dynamic universe where frontiers collide and you're just a pilot trying to make ends meet. How? That's your decision. Vega Strike is designed as a non-linear gaming experience, where you choose what action you want to take.

Vega Strike features a dynamic trading economy, allowing your character to operate as a merchant. Discover what trade routes bring in the most profit, what commodities make you the most money given your ship's cargo space limitations, accept cargo missions and learn to avoid areas of danger (repairs eat into your profits!).

If you are tired of making money on milk runs, or want to try something different, then there are other paths to success. Vega Strike features a mission generator, providing multiple missions to the experienced (and not so experienced) pilots. Engage in bounty hunts, patrols, battles and escort missions. Feel like travelling? Explore the dynamic universe and see the farthest reaches of known space. Want a walk on the wild side? You could always turn pirate! Just be prepared for the consequences.

Your ship just not doing the job you want it to? Vega Strike gives you the ability to purchase from a wide variety of ships capable of doing different jobs. Want to haul cargo? Fight battles? There's a ship for you. Your ship is fully customizable, so if you've got the credit, outfit your craft with the right tools for the job at hand.

Have a chat with the bartender or view the news broadcasts to find out what's going on in the universe. While you're there, talk to the fixers, they may have a job that only you can do. But be warned, you never know where it may lead...

or one of updated repositories.