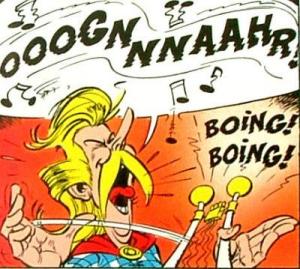 Not pictured: spontaneous rainstorm, fleeing animals and furious villagers.
Kotomi: My name is Ichinose Kotomi. A senior in Class A. My hobby is reading books.
Tomoya: And her weapon is the violin. It takes only 0.2 seconds before sound waves come out from the moment she takes position. The number of people she's felled is countless.
Kotomi: [after playing some more] I've never felled people with the violin.
Tomoya: Do you see us on the floor right now?!
— CLANNAD
Advertisement:

What a Lethal Chef is to food, a Dreadful Musician is to music. This is a character who plays music badly. Glass shatters, animals scatter, and women lament. Even worse, they may not even realize how bad they are, while everyone around them scrambles to halt the performance.

More clever characters may use this entirely-unintended effect to their advantage. Taken to the extreme, where this effect is obtained through skill and used as a weapon, the character becomes a Musical Assassin. If the lethality is the product of the music itself instead of the musician's lack of talent, it's a Brown Note. If the sound is literally capable of physically breaking objects and inflicting damage, it's a Glass-Shattering Sound (if it's mostly confined to shattering brittle materials) or Make Me Wanna Shout (if it's an all-purpose sonic weapon).

Irony as She Is Cast often comes into play here; it's not unusual to find that the bad musician is being played by a good one in Real Life. In fact, sometimes it takes a talented musician to know how to play one who's truly awful.

May overlap with Loud of War and Lounge Lizard; also compare Suckiness Is Painful, Three Chords and the Truth (where musicians do actually know how to play their instruments, but without the complexity and pretentiousness) and Stylistic Suck (same). Related to Hollywood Tone-Deaf, in which bad music is played more realistically although still exaggerated for comic effect; and Terrible Artist, for when characters are unskilled at non-musical forms of art. See also Piss Take Rap.

When adding examples, keep in mind that this trope by definition exaggerates the possible to the impossible.

No Real Life example is allowed here, there's the Narm.Music and Horrible.Music pages for such examples that fall under YMMV.

When Jimmy starts singing, everyone runs for cover, except his one fan.

When Jimmy starts singing, everyone runs for cover, except his one fan.