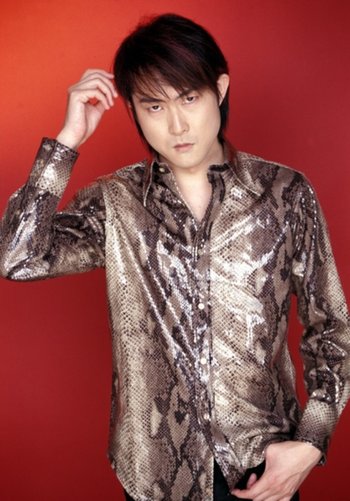 HAAAIL! IL KOYASU!
Oh? You're describing me? Instead of running to Kazuyuki Okitsu or Daisuke Ono you're coming to my description? Even though Yumiko Kobayashi rushed to tell you that my legend dates back to the nineteenth century, like an exam student scrambling to finish the problems on an exam until the last moments before the chime?
Advertisement:

We can't describe the shit out of you without getting closer.

Oh ho! Then describe as much as you like.

Takehito Koyasu (born May 5, 1967 in Yokohama, Japan) is currently the most prolific voice actor in the business. And when we say prolific, we mean it, with lots of varying roles he can pull off easily. Starting from a Determinator, to a calm, cool, intellectual, sarcastic character, to a nobleman to just plain comic relief/gay character. He created Weiß Kreuz, and is a part of the Weiß group, alongside the other leads: Shin-ichiro Miki, Tomokazu Seki, and Hiro Yuki. He is a true Man of a Thousand Voices.

It shall be noted, also, that he's a Promoted Fanboy. Yep, he was a long-time Mobile Suit Gundam fan before landing the roles of Zechs, Gym, Mu and Frederick.

Currently working on a series of CD dramas called Velvet Under World, which may or may not be a Weiß Kreuz spin off. For the most compelling arguments in favour of that, "Velvet Underworld" is Weiß Kreuz's first opening theme and VUW's main character's name? A.Y.A.

He seems to be a good friend of Hikaru Midorikawa and, as a result, there's lots of instances where he plays characters who are rivals with Midorikawa's character, usually with Koyasu's character being the instigator of rivalry. Koyasu has also replaced Kaneto Shiozawa in many roles since the latter's death and can be seen as his successor as they do sound rather similar. Also has relationships with Akira Ishida, Unshō Ishizuka, and to an extent Tessho Genda.

He's a married man (though with someone outside voice acting business) and has a son, Kouki Koyasu, who eventually also followed his footsteps in becoming a voice actor.

Fool! These tropes are not associated with everything in the universe! It was I, Takehito Koyasu!

Hey, did you just describe Takehito Koyasu?
(ﺧ益ﺨ)
G...Guess you did...
Roles...Are there any other roles?
WRYYYYYYYYYYYYYYYYYY!!!
And another thing, you're bad at right-hand corners with that noise!
TAKATORIIIIIII!