Manga / To Your Eternity 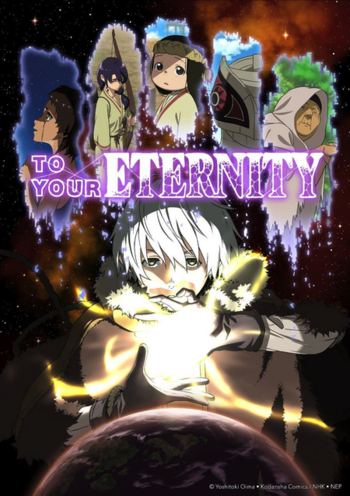 "It" is a lonely traveler that will long outlive you. To those who will someday die, I send this eternal journey.
— Opening narration
Advertisement:

To Your Eternity (original Japanese title: Fumetsu no Anata e, literally "To the Undying You") is a manga series created by Yoshitoki Ooima, previously known for the acclaimed A Silent Voice. It began serialization in Weekly Shōnen Magazine in 2016.

The story follows an immortal being sent to Earth with the task of gaining experiences. The being can shapeshift into forms learned from things that have died near to it. Things ranging from stones, weapons, animals, and people. These forms do not come with memories leaving Immo to learn even the basics of living on their own.

To Your Eternity provides examples of: