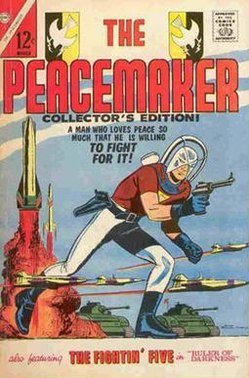 A man who loves peace so much that he is willing to fight for it!
Advertisement:

Peacemaker is the name of a series of superheroes originally owned by Charlton Comics and later acquired by DC Comics. The original Peacemaker first appeared in Fightin' 5 #40 (November 1966) and was created by writer Joe Gill and artist Pat Boyette.

The original Peacemaker is Christopher Smith, a pacifist diplomat so committed to peace that he was willing to use force as a superhero to advance the cause. For a time, the Peacemaker serves as a U.S. government agent under the auspices of Checkmate, a special-forces unit, hunting down terrorists until his own behavior becomes too extreme. He eventually crashes a helicopter to destroy tanks controlled by the supervillain Eclipso and is reported dead.

An unnamed man took up the mantle of Peacemaker as a member of a U.N. sanctioned group put together to take down Justice League International called the League Busters. This Peacemaker only appeared for a couple of issues before disappearing entirely.

The third Peacemaker was Mitchell Black, a surgeon, who was recruited by the "Peacemaker Project", an organization unaffiliated with the Pax Institute and the US government's "Project Peacemaker". Black would reappear in the miniseries titled The L.A.W., reunited with the other Charlton Heroes.

He was the inspiration of The Comedian from Watchmen.

He made his live-action debut in the DC Extended Universe in James Gunn's The Suicide Squad portrayed by John Cena, followed by his own series titled Peacemaker (also created by Gunn) on HBO Max.