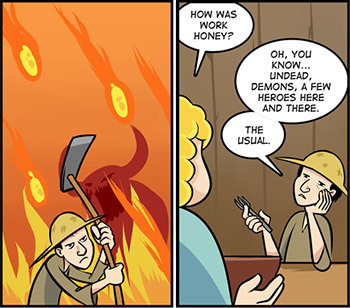 "I have done all that can be done. There is nothing left. No quests to be undertaken. No villains to be slain. No challenges to face. Except for you. You are my last challenge. Only you can send me to Sovngarde with honor."
— The Ebony Warrior, The Elder Scrolls V: Skyrim
Advertisement:

A cat chasing a car? They've seen it. People playing card games for the fate of the world? They've seen it. They've explained the Noodle Incident twice. They even know what the Cow Tools are for. Yes, these characters have Seen It All.

The way the trope's portrayed varies depending on the characters. They may either become The Stoic since they've seen everything they have, or they may simply be Deadpan Snarkers. They may or may not also be smug about the fact that they've seen it all already. These portrayals, however, while very common, aren't the only ways to portray this trope.

Compare Fantastically Indifferent, Oh, No... Not Again!, Prescience Is Predictable and The Anticipator. See also Seen-It-All Suicide and Nothing Left to Do but Die. Not to be confused with Wake Up, Go to School, Save the World. Beings that are Really 700 Years Old or from the Time Abyss have a high chance of having seen it all already. Often happens to a Weirdness Magnet. Contrast I've Never Seen Anything Like This Before. Sister trope to Conditioned to Accept Horror.

No relation to Seen-It-All Suicide, where characters off themselves after witnessing some truly bizarre sight.

Having been a roadie to various bands in the past, Captain Ed have experienced things that Jack and Kyle could only describe as "a cream-dream".

Having been a roadie to various bands in the past, Captain Ed have experienced things that Jack and Kyle could only describe as "a cream-dream".