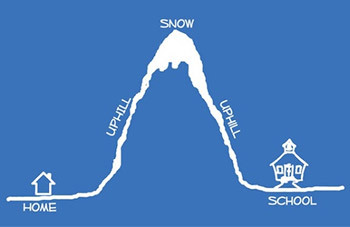 And we liked it that way!
"Lemme tell you somethin', you whiny little snot
There's somethin' wrong with all you kids today
You just don't appreciate all the things you got
We were hungry, broke, and miserable
And we liked it fine that way!"
— "Weird Al" Yankovic, "When I Was Your Age"
Advertisement:

This is a Stock Phrase speech by any character denigrating modern kids, modern conveniences, modern behavior, modern anything, against the standards of the speaker's past. It doesn't matter how many conveniences or benefits are available now; the speaker of the When I Was Your Age rant will not waver in his view that "They Changed It, Now It Sucks!"

The most common version of this trope is for the speaker to criticize young people as having things easy compared to the hardships of the past; the When I Was Your Age rant almost always concludes that these advantages have made the young people of today soft, lazy, spoiled, or worse; the hardships gave people moral fiber.

This is a perennial favorite of the Grumpy Old Man or Racist Grandma, and is often played for comedy — expect to hear some variation of "I had to walk fifteen milesnote because it's always fifteen miles, don't question it to school in the snow! Barefoot! Uphill! Both ways!"

When the point of the speech is how much better it used to be, you have a Nostalgia Filter in place. Might be part of a Rambling Old Man Monologue.

This is not completely made up, though. This Trope is in fact Older Than Dirt, as it is at least 4,000 years old (and probably as old as mankind itself). Sociologists call this mindstate "juvenoia."

Obviously, this is a very toxic mindset, as they are essentially saying that having it bad during their time makes for a better livelihood while their suffering gives them an inflated sense of entitlement in present day. If you hear any older person rambling about this, shut them up and try to remove their Nostalgia Filter before they make people undergo unnecessary hardships.

Compare Screw Politeness, I'm a Senior!, While You Were in Diapers, Misery Poker, Is That What They're Calling It Now?, Glory Days (for a distorted view saying that their suffering makes their generation better than the current one).

open/close all folders
Advertising
Anime and Manga
Comic Books
Fan Works
Films — Animated
Films — Live-Action
Jokes
Literature
Live-Action TV
Music
Newspaper Comics
Pinball
Puppet Shows
Radio
Stand-Up Comedy
Tabletop Games
Theatre
Video Games
Visual Novels
Webcomics
Web Original
Western Animation
Real Life
Statler: Today's tropers have it easy. When we were their age, our trope pages didn't even have stingers!
Waldorf: Yeah, and we didn't have computers, so we had to write out all the examples by hand! By the time you were done you'd have a callus that could stop a .38!
Statler: I can't remember, did we like it that way?
Waldorf: Of course not! When have we ever liked anything?!
Both: Do-ho-ho-ho-hoh!

Alternative Title(s): In My Day Rant, Back In My Day