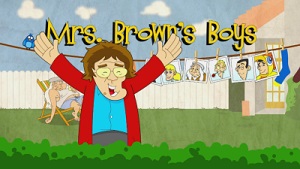 Mrs Brown's Boys is a Dom Com about an Irish Catholic housewife with a dirty mind and equally dirty mouth and little shame about using it. She is the matriarch of her family, having four sons and one daughter (many of whom live in her small working class house as they aren't able to afford to move out yet) as well as with her senile father-in-law. The show was created and written by Irish comedian Brendan O'Carroll — who also plays Mrs Agnes Brown herself by dressing in drag.

Originally airing on RTÉ One in Ireland, and broadcast shortly after on BBC One, note Although set in Dublin, the show is made at the BBC's Glasgow studios it has had very mixed reception on either side of the Irish Sea, with criticism about its cliché plots and the fact that the idea of a man pretending to be a dirty-mouthed old lady is considered outdated humour. However it has received high ratings on both channels, and aside from the predictable plots there is a certain irreverence to the series which centres on how harsh Mrs Brown can act towards her family and friends as well as having fair amount of "meta" humour and jokes which break the fourth wall, with Brendan O'Carroll occasionally going wildly off-script just to see what the rest of the cast will do.

A movie was produced by Universal Studios and was released June 27th 2014.

There's also a stage version, released on DVD, which the TV scripts are based on, but has more swearing.

There is also a French-Canadian version called Mme Lebrun.