Attending Your Own Funeral 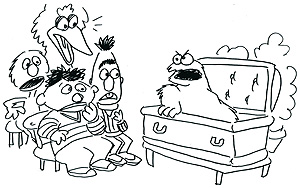 HELLO ME NOT DEAD
Priestbot: We are gathered here to mourn the death of Calculon; industrialist, private eye... friend.
Calculon: Mind if I give the eulogy?
Monique: Calculon, you're alive!
— All My Circuits (Futurama)

A character shows up alive to his or her own funeral, whether through deliberately faking it, being mistakenly declared dead, resurrection, or Time Travel. The Not Quite Dead character may either reveal him/herself to be alive or attend the funeral in disguise and leave with no one the wiser. Or sometimes the character won't even know they've been presumed dead until they walk through the door...

Compare Whodunnit to Me?. May cross over with Not Now, We're Too Busy Crying over You. See also The "Fun" in "Funeral", of which this could be a subtrope.