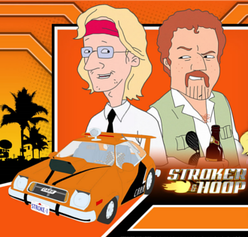 Stroker (Jon Glaser) falls short as a detective mostly due to his own short-sightedness, self-involvement and greed more than bad investigative skills. He has a young son (by his Latina ex-wife), whom he loves, even if he can't quite seem to show it properly.

Hoop (Speed Levitch) is a very touchy-feely, sensitive, pacifistic sort who's dressed like a bad motivational speaker. He prefers to talk problems out rather than skip straight to the gunplay. This never works.

C.A.R.R. (Paul Christie) is essentially the opposite of K.I.T.T. from Knight Rider. He's a junky old beater (not quite The Alleged Car, but past his prime), he's not too smart, and lacks any really useful gadgetry other than talking and the ability to drive himself. He listens to a lot of ultra-right-wing talk shows, since he doesn't have an FM radio. He was built by Stroker's mechanic friend "Double-Wide" (who is voiced by Curtis Armstrong), whose odd private life is often helpful.

Finally, they are aided by the jovial, and perhaps most competent, Coroner Rick. He is often played as a Token Black Friend to quite nearly every main character.

Since the two titular characters have detective skills that are mediocre at best and generally lack decent resumes, they have to settle for taking cases for people too poor to afford more competent detectives.

The characters were mostly Genre Blind, as they often failed anyway, and many a Lampshade was hung on various tropes. As far as trope use in parodies goes, this show is a great example.

Canceled only after a season of 13 episodes and with no ending.