You Have Failed Me 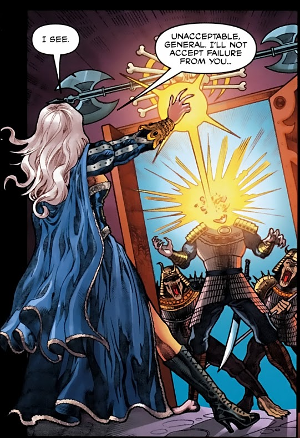 Admiral Ozzel: Lord Vader. The fleet has moved out of lightspeed and we're preparing to— [Force choked]
Darth Vader: You have failed me for the last time, Admiral.
— Star Wars: The Empire Strikes Back
Advertisement:

Commonly in a Sic 'em scene, the Big Bad — usually an Evil Overlord or Diabolical Mastermind — kills one of their henchmen who has failed to capture and/or kill The Hero, as motivation to all of their other (surviving) underlings not to repeat their failure. Presumably, the other underlings immediately all fall into line instead of (say) quietly updating their resumes and trying to find a less psychopathic overlord to work for. Some bad guys will use the Blofeld Ploy to pull off the underling murder. Others will drop the offending underling through a Trap Door into a Shark Pool or other deathtrap, or feed them to their Right-Hand Attack Dog. A variation has the Big Bad not killing the failed underling on the spot but sending him off on a Suicide Mission, usually with a cold-hearted reminder that doing one's duty comes before self-preservation.

The Big Bad may eventually realize there's something special about the hero and stop summarily executing minions for their failures as they gain a healthy admiration for their skills, but don't bet on it. Evil organizations more often than not will stick to an explicit policy of "Succeed, or die."

Few stories address the question of what happens when this policy is taken to its logical conclusion. Realistically, such a policy causes its practitioners to kill off many of their own skilled leaders, while leaving the survivors demoralized, afraid to take initiative, more concerned with sucking up and dodging blame than with actually doing their jobs well, and inclined to either desert, defect, or kill their boss before he kills them. See the unfortunate results described in the Hitler and Stalin examples under "Real Life". Sometimes, this makes it easier for the heroes to spare Mooks when they beg for mercy; if the heroes know that the minions will be killed if they try to return to the villains' service, they know they won't end up regretting letting them live, and might even do so because they believe the minions are working under duress. In a reconstruction, pragmatic, if ruthless, villains may avoid this trope for most cases of failure, reserving this fate explicitly for those who have shown repeated or total incompetence. If the villian decides to get involved in the task at hand personally, he may express his displeasure with his mook by destroying him before moving on to it.

Some Big Bads have the Genre Savvy to not advertise the fact. Instead, they will arrange for a Hunting "Accident" or Assassination Attempt with Plausible Deniability. Some will subvert the practice and let the constant failure cause the person in question to fall into further public disgrace among his own men. In such cases, Klingon Promotion is often discretely encouraged (and discretely sponsored) as a way of getting rid of an underling who has failed too many times.

Another variant on this is instead of the Big Bad doing this, a high-ranking, oftentimes very loyal, and particularly ruthless official working for the Big Bad, possibly The Dragon, does it instead — perhaps without the boss' approval.

Some Big Bads do this by phone. Mook 1 phones Big Bad with bad news while Mook 2 stands nearby. Big Bad asks Mook 1 to pass his phone to Mook 2. Mook 2 says "Ok Boss, I understand. I'll see to that rightaway. Bye Boss... here's your phone back" and then shoots Mook 1 while he is distracted with his phone.

See also: Bad Boss, Shoot the Messenger, You Have Outlived Your Usefulness, Villainous Demotivator, and We Have Reserves. Contrast Even Evil Has Loved Ones, I Will Punish Your Friend for Your Failure, and Can't Kill You, Still Need You. Can lead to Mook Depletion if the villain overdoes this. See Make an Example of Them when the failure is punished especially harshly "to encourage the others". See also The Purge when this is done en masse to anyone even suspected of incompetence or disloyalty. May be an example of Karmic Death if the character has actually earned this fate.

Shoot the Dangerous Minion can be considered the opposite, where the villain destroys his minion because he's too good at his job and might become another threat. Compare and contrast Self-Punishment Over Failure, where the minions themselves are behind their punishment.