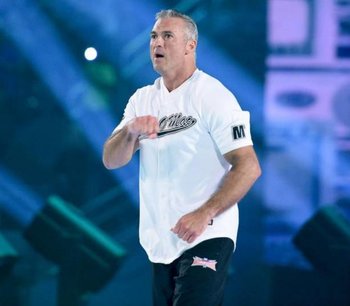 Here comes the money...
"There could be no better man to be commissioner of SmackDown, than the man who has no fear."
— The Undertaker
Advertisement:

Shane Brandon McMahon (born January 15, 1970) is the eldest of Vince McMahon's children and, like his sister Stephanie, has been heavily involved with Professional Wrestling ever since young adulthood. He has spent over twenty years with WWE, working his way up from ring crew to referee to commentator to wrestler to GM-figure.

He is one of the only fourth-generation wrestlers, and was the former head of Global Media for WWE before leaving in early 2010 to become the CEO of an Asian internet company as well as part of the Board of Directors of a sports management firm. In 2016 he returned to the company and the spotlight, initially being put in charge of WWE Raw together with Stephanie, before Vince decided to split the brands, leaving Stephanie in charge of Raw and putting Shane in command of WWE SmackDown until late 2019, when he lost his Career vs. Career ladder match against Kevin Owens.