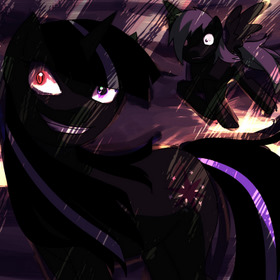 “You will not call me Twilight. My name is Nihilus.”
"Go to your friends. Look them in the eyes, talk with them, laugh with them, and tell me if lifting a duster is more magical than what you feel, truly feel, in your heart. Friendship is a force, Twilight Sparkle.

“Love. Wonder. Happiness. Titan has none of these things. If you allow him to take ours, then you give up our only advantage. If we are going to win, it will be for our intangible virtues, not brute force. Magic, real magic, the kind that I use to raise the moon, cannot be fought.”
— Princess Luna (actually Celestia in disguise)
Advertisement:

is a completed My Little Pony: Friendship Is Magic fanfic written by AestheticB.

Long ago, in the magical land of Equestria, there lived a powerful King and his dark Queen. Immortal and ignorant, their end came at the hooves of their daughters, Celestia and Luna, who sought to build a better future for ponykind.

Twilight Sparkle is trapped inside her own mind, slave to a cruel and impulsive consciousness built from everything she is not. Powerless and voiceless, she must find a way to stop the being that calls itself Nihilus from destroying everything she holds dear.

Facing her father in mortal combat, Celestia must do everything she can to ensure that ponykind has the tools to survive before she falls. With inevitable defeat bearing down upon her, she makes the first move in the oldest and deadliest game known to creation.

NOTE: This was once named Ponies Make War but the author has since renamed it, explaining the reason for doing so in this blog post