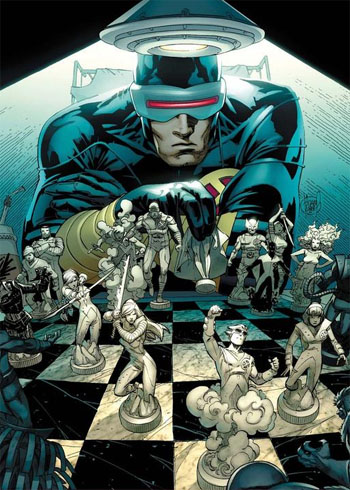 "Treating people just like pawns in chess…"
"They say it's the game of kings. That chess teaches one to think strategically. What a load of rubbish! Both sides have identical pieces, the rules stay invariably the same. How does this mirror real life? ...pawns see only their comrades at their sides and their foes across the field. A king has a different view of the chessboard. His greatest foes surround him. His own chessmen might trap him. And that is check — and death. You see, witcher, chess is the art of sacrificing your own pieces. Now do you see?"
— Radovid V the Stern, The Witcher 3: Wild Hunt
Advertisement:

Chessmasters can occasionally or can always denoted be The Strategist, although given the volatility of war, most Strategists will only ply their schemes one campaign at a time, with an emphasis on short-term goals (and an eye towards all possible future contingencies). The Game Master may be a Chessmaster also, but many of them prefer to give their orders more directly. Many chessmasters are Villains With Good Publicity, but they can also be someone no one has ever heard of. Almost all Ancient Conspiracies are led by a collective of chessmasters, silently working toward their goals over generations. Chessmasters also tend to be overconfident and usually panic when their "perfect" plans fail — unless they just start laughing instead. This is also usually averted when Magnificent Bastard and Chessmaster overlap, since a Magnificent Bastard is quite good at rebounding from defeat. Fond of a Battle of Wits.