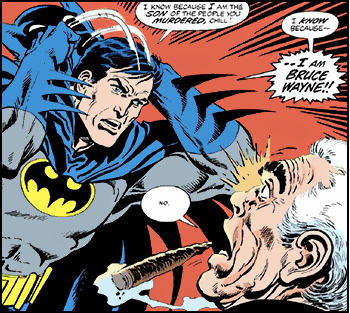 "That's right, Miss Lang, it was him all the time! He just combed his hair and stuck on a pair of glasses! Ha ha ha! What a great gag!"
— Prankster & Toyman (after exposing Superman as Clark Kent), Whatever Happened to the Man of Tomorrow?
Advertisement:

Superheroes often have a Secret Identity which they conceal from the world, or perhaps just secretly engage in heroics. They do it for lots of reasons — maybe to keep themselves or their loved ones safe, and so they keep them willfully ignorant. But when you do that, you’re likely to run into some complications. Sooner or later, friends, family and dates are going to wonder why you keep running out on them. You’ll find yourself missing school and work, since crime doesn’t exactly let you keep regular hours. Eventually, you might found your civilian identity held captive, with no way for the 'hero' to show up. So it can be tough to keep that secret identity, well... secret.

So for most heroes, they’ll eventually run into The Unmasking. Something will happen. Maybe the hero will be forced to tell, due to a Super Registration Act. Maybe they’ll choose to tell a loved one. Maybe it’ll be something as embarrassing as someone seeing them change into their costume. Either way, the results are the same - their secret is no longer a secret.

Responses can be varied. If it’s a friend or loved one who discovers it, they’ll usually be accepting and become Secret Keepers. However, it's equally likely that they'll be angry or scared, and either tell the hero to stop putting himself in danger or, if his powers are freaky, ask if they’ve tried being normal. If someone antagonistic finds out, expect bad things, ranging from blackmail to making the hero’s life a living hell. If the outing is public, then there will most likely be a lot of controversy, with people badgering the newly-exposed civilian persona for both good and bad reasons.

Writers tend to introduce this element to prevent stories from becoming too old. There are only so many times you can keep people from finding out the secret identity before the audience begins to get tired of it, and letting either friends or enemies know the truth allows for new plots and character interactions. On the negative side, people might complain They Changed It, Now It Sucks!. If keeping the identity completely secret is somehow intrinsic to the story’s formula, expect this to show up for a What If? episode, or to at least have the Reset Button firmly pressed by the end of the tale, usually thanks to Laser-Guided Amnesia.

Compare The Reveal, where the audience is the group suddenly in on the secret. People might wonder why it doesn’t happen to heroes who engage in Clark Kenting, and have a Paper-Thin Disguise. Those most likely to be let in on it are romantic interests and the Secret Chaser. If the identity is connected to an alternate world or conspiracy, this might result in a Broken Masquerade.

When attempting to show Tigger another terrific bounce, Roo crashes and his mask comes apart, causing Tigger to realize his "family" were just his friends in costume, and he's been duped.

When attempting to show Tigger another terrific bounce, Roo crashes and his mask comes apart, causing Tigger to realize his "family" were just his friends in costume, and he's been duped.