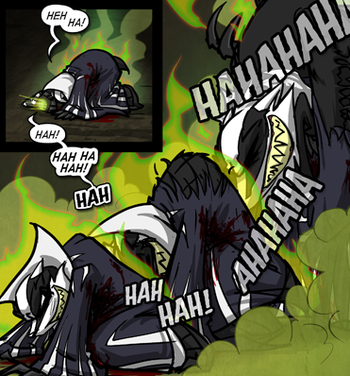 So, the hero has stormed the Big Bad's lair, taken care of the Mooks, and disabled the Doomsday Device. Approaching the cowering villain, they raise their weapon of choice to deliver the Coup de Grâce... and the villain starts laughing. The hero will commonly ask, "What's so funny?", whereupon the full extent of their foe's nefarious scheme will be revealed. Contrary to appearances, the villain has the advantage.

Perhaps it is a case of I Am Not Left-Handed, and the situation is totally reversed as the villain reveals a weapon or ability they had previously concealed and uses it to defeat the hero. Maybe the villain is truly defeated, but they have another trick up their sleeve: maybe the hero cannot deal the final blow because the Love Interest is caught in a Death Trap trigered by a Dead Man's Switch wired to activate if the villain is slain. Sometimes, even as the villain dies, they Die Laughing. Maybe with their final chuckle, they taunt the hero by declaring that You Are Too Late or My Death Is Just the Beginning.

Inverted when a hero looks on the verge of defeat before revealing that they expected this all along, in which case a Big Damn Heroes moment may ensue.

Regardless of the details, this is probably bad for whoever is not laughing. It tends to prompt a realization that they have been Out-Gambitted, followed by Oh, Crap!

Literal laughter is not actually necessary for it to be this trope, just any kind of expression dissonant with the situation at hand. Will often overlap with Laughing Mad, Evil Laugh, Xanatos Gambit, "The Reason You Suck" Speech. May immediately precede The Reveal. Almost always a Plot Twist.

Close sister trope to All According to Plan. Compare Dissonant Serenity and "Oh, Crap!" Fakeout (though it is often combined with this trope; few things get across that you're not actually scared better than being unable to hold a straight face). Arguably an inversion of Thwarted Coup de Grâce. See also Cheshire Cat Grin.

Beware! By its very nature, this page contains loads and loads of spoilers. Read at your own risk!