Film / Indiana Jones and the Temple of Doom 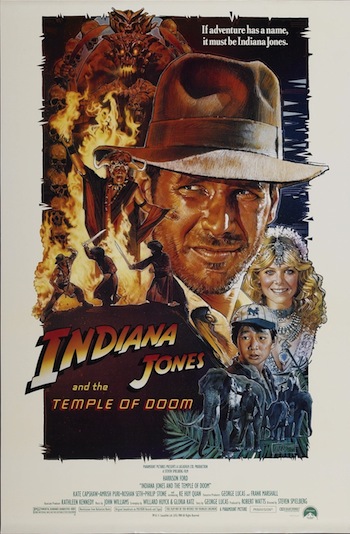 Indiana Jones and the Temple of Doom is the second film in the Indiana Jones film series, and a prequel to the previous film Raiders of the Lost Ark (making it the first in terms of narrative chronology).

The prologue sees Indy getting into some trouble in mid-1930s Shanghai, and nearly dying from poisoning when one of his clients tries to double-cross him. He escapes with his two sidekicks aboard a plane but they crash in the Himalayas. The main plot then begins when they arrive at a village in India, and the inhabitants tell them an evil cult stole a sacred stone from them and kidnapped their children for slave labor. Indy then sets out to retrieve the stones and free the children from the cult's grip.

The movie was released on May 23, 1984. Along with the first Gremlins film, Temple of Doom is largely responsible for the creation of the PG-13 rating.

"Indiana Jones and the Tropes of Doom":