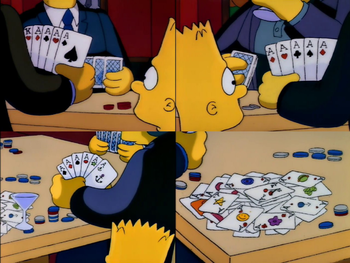 Cheating in games is almost as old as games themselves, but if you get caught, you will be instantly kicked out of the competition.

This trope however, is when a character is cheating in an obvious and blatant manner and all the other players and the audience can clearly see that. He may do something seemingly impossible that could be only be done with special equipment or supernatural powers that aren't allowed, or something that the game itself makes impossible. The best example is the name of this trope, named after the very common gag in media of a character playing Poker and having a hand of five aces, when a card deck has only fournote This can be possible in card games that are played with multiple decks at once, but the scoring rules might ignore duplicates, or something similar like having a hand of six cards, when in Poker you can only get five.

In extreme cases, all the competitors are doing something impossible or that they can't do all at once, such as a card game in which every player has four aces, meaning all of them are cheating.note Bar the one player that might have legitimately gotten four aces; but what are the odds of that?

This is pretty much a Paper-Thin Disguise version of cheating and it's almost always Played for Comedy. The more comedic version is when no one notices the obvious cheating and they maybe even think the character is just that good, or someone actually notices but does nothing about it. The less comedic version is when audience and other competitors notice it and complain, but the cheater still gets away, or doesn't. The Played for Drama version is when it's revealed or stated since the beginning that the whole game is rigged, and/or the cheater is such a powerful or dangerous person that nobody will risk standing up to him.

When adding examples involving supernatural powers, avoid cases where use of powers is allowed through Loophole Abuse or because all the characters regard "creative" use of superpowers as part of the fun.