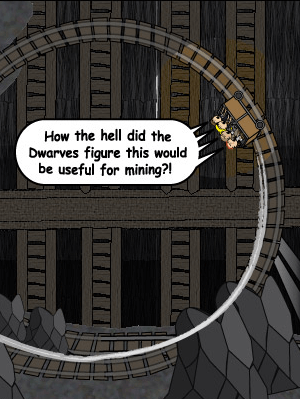 "Laddie, we're usin' the centripetal force from the loop-the-loop to separate the lighter rock from the denser ore."
"I reckon you're all ready to take a nice, easy tour of this here ol' mine. Ohhhh, they fixed it up real nice and safe for ya, heh heh heh! 'Cept that you ain't goin' there, noooo! You're gonna see MY kinda mine! Ah ha ha ha ha! If you can! Just try and come back alive! Ah ha ha ha haaaa!!"
— Evil tour guide, Devil's Mine Ride
Advertisement:

A staple in Western movies along with a couple Adventure films, the Rollercoaster Mine is a mountain railway used as a roller coaster. Mining trolleys roll at high speed down impractically steep and seemingly frictionless rails that weave in and out of an improbably long chain of tunnels, and often across bridges. Sometimes, they'll even do jumps. Works great for a Chase Scene.

Surprisingly often, a mine cart full of protagonists that's been rolling downhill at great speed for a couple of minutes will suddenly break through a nailed-together criss-cross of old boards, and burst out on the surface. If this phenomenon can be harnessed, it will provide the world with infinite energy. Of course, they may have started at a higher altitude, or something.

Theme Park Landscape is the supertrope. Minecart Madness is a Video Game-specific subtrope.

You're trapped in a mine, and your only way out is a rollercoaster. Beware of signs with skulls on them.

You're trapped in a mine, and your only way out is a rollercoaster. Beware of signs with skulls on them.