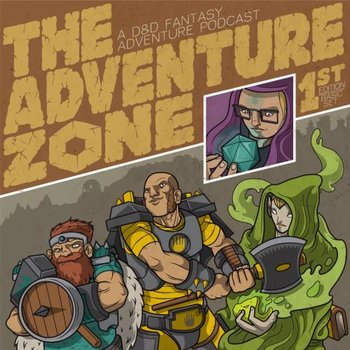 The stage is set, our heroes ready; so steel your nerves and keep them steady. And do not fear this path unknown... enter The Adventure Zone!
"The Adventure Zone Balance: the story of four idiots who played D&D so hard they made themselves cry."
— Justin McElroy
Advertisement:

The Adventure Zone: Balance is a Dungeon Punk/Science Fantasy themed arc of The Adventure Zone podcast featuring the McElroy Brothers (Justin, Travis, and Griffin) playing Dungeons & Dragons with their father Clint. Griffin is the Dungeon Master while other three play.

The campaign follows a fairly typical crew of adventurers traveling Faerûn to find their fortune: the human fighter Magnus Burnsides (Travis), the high elf wizard Taako (Justin), and the dwarven cleric Merle Highchurch (Clint). After working together for some time, they're roped into a job by Merle's cousin to help him transport goods to Phandalin, but he ends up kidnapped by gerblins and taken to an abandoned mine that once belonged to his and Merle's ancestors. They find themselves in a struggle with a drow over the Phoenix Fire Gauntlet, a weapon of world-changing power, and somehow manage to defeat him between their goofs. Even more surprisingly, they are able to safely contain the Gauntlet without falling under its control. This earns them recruitment as agents of the Bureau of Balance, a secret guild formed to retrieve and destroy the Gauntlet and the six other Grand Relics to prevent them from causing more destruction, death, and war than they already have. Magnus, Taako, and Merle can only take themselves so seriously, though...

In this same continuity is the adventures of the Hogsbottom Three, a D&D campaign played by the cast of The Flophouse. Stuart Wellington is the DM, with Elliot Kalan playing Scales the Dragonborn bard, Dan McCoy playing Lucian Buttwatcher the high elf druid, and special guest Zhubin Parang playing Tanzer Silverview the human ranger.

The series also has an ongoing graphic novel adaptation. Each volume covers one arc of the podcast (with parts of the Lunar Interludes folded in where applicable). The first volume was released in July of 2018, with subsequent books coming out at a rate of one per year.

In January 2020 it was announced that the series would receive an animated adaptation on the NBC streaming service Peacock.

In November 2021, the series returned for a 3-episode miniseries called "The Zone of Adventure: Imbalance". Set ten years after Story and Song, the miniseries features Aabria Iyengar as the DM and airs on the McElroy Family YouTube channel

Spoilers for The Stolen Century and Story and Song and related spoilers from The Suffering Game should be spoiler-tagged. Everything else is fair game. Reader beware: you're about to enter... the Spoiler Zone!