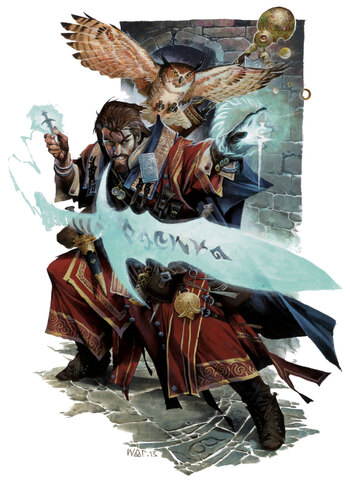 "It is made of magic. Raw magic. Solidified. Curdled. Renewed from second to second. Could you imagine a better substance to build the new home of sourcery?"
— Coin describing his Mage Tower, Sourcery
Advertisement:

When something or someone is literally made of magic, or at least an equivalent.

This shouldn't be confused with Made of Phlebotinum (i.e "Phlebotinum Runs The World"), where 'magic' makes the setting work at all (it does count if the setting itself is made of magic). You may occasionally find someone to be Made Of Evil Magic. A Place of Power is usually made of magic, as well as many supernatural beings.

Creatures that are made of magic may in fact be a Pure Magic Being, or an Energy Being, depending on whether the setting has more of a Science Fiction or a Fantasy flavor. In a Science Fantasy setting, the creature might be both.

They are most likely very dependent on mana to exist. If the setting is chock-full, no problem. If not....

Anti-Magic (or worse, Magic Eater) characters/things are often the bane of this character/thing.

Compare Born of Magic, Pure Energy, Hard Light and The Power of Creation.