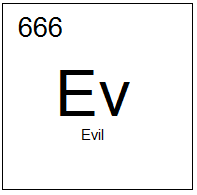 Atomic Weight: 4.13note Not related to Homestuck.
"Do be careful! Don't lose any of that stuff. That's concentrated evil. One drop of that could turn you all into hermit crabs."
— Supreme Being, Time Bandits
Advertisement:

The bad guys aren't just bad, they are Bad! The concentrated, physical manifestation of it to be precise.

Somehow, the villain's physical body is made up of a tangible form of Evil. If you cut them, they will "bleed" Evil, and severed limbs or cuts to the torso won't reveal skin, muscle, bone and organs but a uniform dark material. These villains are, unsurprisingly, not human; or at least, not anymore. They may be an Anthropomorphic Personification of Evil, a God of Evil that is made up of their portfolio rather than an organic/'divine' being in control of it, or a Pure Energy Being made of The Dark Side and the Ultimate Evil. Normal humans can become Made Of Evil if they spend years being really evil and get dosed with Phlebotinum. An everyday good person may have the darkness in their heart forcibly ejected to make The Heartless, or an Enemy Without. Commonly, they are Emotion Eaters who feed on negative emotions, perhaps even being a God of Evil who runs off of / is the source of these negative emotions. A subcategory of this is when the villain is the personification of any single certain aspect of evil, he or she is an Embodiment of Vice. He could also be the personification of one ugly aspect of life for example, of war as a War God. Their motivation will invariably be For the Evulz, but note the distinction: a Made of Evil entity is compelled by their nature to do evil for the sake of it.

When we say "Evil", we don't just mean "Made of immorality", but just about any not-nice emotion, concept, and elemental power, such as: Darkness, Death, Decay, Hate, Sin, and Unholiness. This makes them very similar to physical ghosts; they form a kind of "negative energy" Ectoplasm (of evil) that is nonetheless completely tangible and is completely, indivisibly evil to its smallest fermion (of evil). Unlike physical ghosts, this "evil" tends to remain tangible until (and sometimes after) the Made Of Evil being is killed. Understandably, because Good Hurts Evil, expect them to be highly vulnerable to Depleted Phlebotinum Shells, scream "It Burns!" and suffer Glamour Failure in the face of holy relics, and at times have a Weaksauce Weakness to The Power of Love and The Power of Friendship... unless they are so evil they create a Cross-Melting Aura, of course.

When killed, they usually "decompose" into a black, oily substance (of evil) or thick black smoke (of evil) before fading away. If they were a Walking Wasteland (of evil), expect there to be No Ontological Inertia as flowers spring and the world lights up at their death; though the specific spot they die or are interred will become a cursed, haunted place. That said, killing them is often easier said than done, since they're the Evil equivalent of Jello, they don't have any vital organs (of evil) to hit, and can sometimes even regenerate From a Single Cell (of evil). Characters are strongly advised that even the ashes of Evil are not a toy, because touching, eating, drinking, or wearing anything made from pure evil will not end well. May be an example of As Long as There is Evil, or a Residual Evil Entity.

Compare and contrast Complete Monster, a character who is consciously purely immoral instead of being physically composed of immorality. Contrast Evil Is Sterile, which implies that something being "made of evil" is a logical contradiction. The Good Counterpart is Made of Good.

TWA recommends having the Dark Lord made out of pure evil or else it will actually make people think.

TWA recommends having the Dark Lord made out of pure evil or else it will actually make people think.