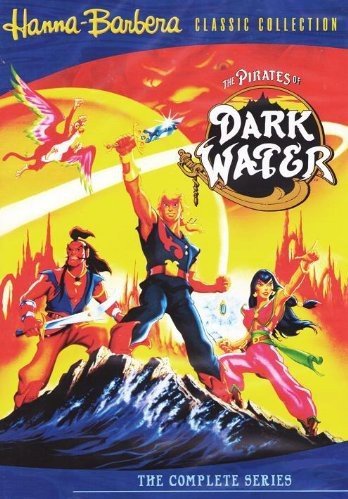 ”Thirteen treasures of ancient time,
thirteen lessons of rule in rhyme.
To find the jewels in secret places,
follow where the compass faces.
If returned from the shore beyond,
a new day dawns for Octopon.
But if they should fall into evil hands,
darkness descends on all the lands.
For these riches two shall vie,
in the realm of Dark Water where the Treasures lie.”
Advertisement:

Short-lived but fantastic 1991-1993 Hanna-Barbera cartoon series which switched off between syndication and ABC. It began as a five-part miniseries which aired on Fox Kids as simply Dark Water. It's well known as one of the first animated television shows for children to have legitimate high-stake adventures and an epic storyline.

Ren is the prince of a fallen kingdom, and he has to find the Thirteen Treasures of Rule to restore it to its once pristine glory. Rounding out his "unlikely but loyal crew of misfits" are ecomancer Tula, roguish Ioz, and the monkeybird Niddler.

However, Ren learns that his quest is far more urgent than simply personal career advancement; the menacing substance called dark water that consumes everything it touches is spreading and it threatens to destroy the world. Only the thirteen treasures can stop it and Ren must find them before it is too late.

The high production costs and drop in art quality after its Channel Hop dealt the series a fatal blow and it was canceled 21 episodes into its run (only eight of the thirteen treasures had been collected). All 21 episodes were later released on DVD on August 31, 2010, listed as The Complete Series

. Additionally, in 1991 Marvel Comics released a comic book series based on the show.

The series was created by David Kirschner, producer of Child's Play and writer of An American Tail. It was also Hanna-Barbera's first animated television series to have a far more substantial budget and more streamlined animation.