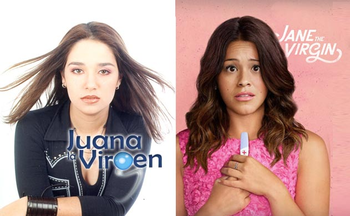 Don't forget: up north Latino Is Brown.
"Now, as you can imagine, there's a problem in properly translating a French comedy into American. The sense of humor's different. The point of view. Words always mean something else. So I start with a quick, literal translation. Then I adapt the dialogue, make it into the American equivalent."
— Abe Burrows, on Cactus Flower
Advertisement:

Say you're a writer/director who has managed to make a good film outside of the Hollywood system. Congratulations! Hollywood is so impressed with your movie that they want make it for themselves and change everything. You say yes, and heck, they might even let you direct it, but don't hold your breath. First off, your script needs a total rewrite to massage out all the Values Dissonance. Then all your unknown actors are swapped out for Hollywood stars. The setting will probably get changed, and production values get upgraded by a factor of ten. The resulting Foreign Remake might turn out better or worse than the original depending on the minds at work.

Say you're a Bollywood veteran who is spending a quiet evening on the internet. Suddenly you stumble across the synopsis for a Hollywood movie that looks suspiciously like the popular film you made three years ago. In fact, it's the exact same premise. And it was released to theaters a year ago. Why haven't you heard anything about this until now? After watching the DVD, you discover that it's a garbled version of your film, without the singing and dancing, and the walk in the rain is replaced with a sex scene. What the hell?

Ultimately, whenever something is remade in a different country, it's a foreign remake. Hollywood and Bollywood tend to get the most attention for theirs, but it happens all over. India, in fact, often does this internally: because different parts of India have different official languages, successful movies in one language will often be remade in one or several other languages, for the benefit of a different audience.

Related to The Remake and Self Remake.

Contrast with Canada Does Not Exist, where by design or by imposition, Canadians make their own foreign remakes without making a domestic original first.