Film / The Mirror Has Two Faces 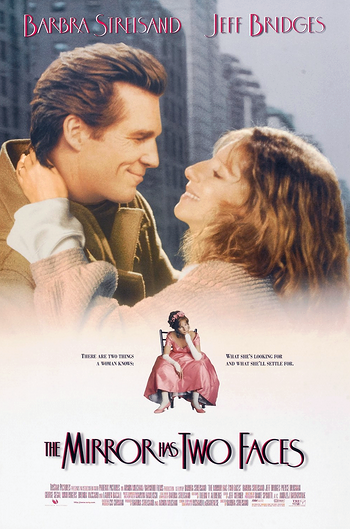 The Mirror Has Two Faces is a 1996 romantic comedy-drama film produced and directed by Barbra Streisand, who also stars opposite Jeff Bridges and the legendary Lauren Bacall. Mimi Rogers plays Rose's sister, Claire, and Pierce Brosnan plays her brother-in-law, Alex, for whom Rose once had feelings.

Columbia math professor Greg Larkin (Bridges) is tired of having his life ruined by sex, so he places an ad for an intelligent, like-minded individual to enter into a relationship not based on sexual attraction. Frumpy, but sweet and funny English Lit professor Rose Morgan (Streisand) is so insecure about her appearance that she cancels every date she has and spends every evening at home with her mother (Bacall).

When Claire answers Greg’s ad on her behalf, he sits in on one of her classes where she coincidentally gives a talk on love and sex in the media, and how they are used to manipulate viewers. Thinking that she would be receptive to his ideas about sex and relationships, he asks her out on a date, and the two begin a whirlwind platonic friendship. However, Rose does want romance and passion in her life, and eventually begins to fall for Greg who, unbeknownst to either of them, is also falling for Rose.

While not exactly a masterpiece of a romantic comedy, it's a fun little movie with a surprising amount of wit, and definitely a comfort film for geeky girls everywhere.

”The Mirror Has Two Faces” contains examples of: