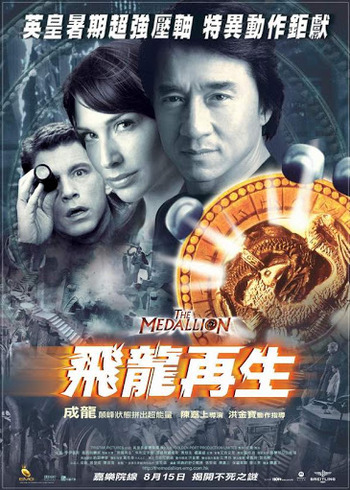 Chan and his precioussssssss...
Advertisement:

The Medallion (Chinese:飛龍再生) is a 2003 action comedy film co-written and directed by the Hong Kong film director Gordon Chan, and starring Jackie Chan, Lee Evans, Claire Forlani and Julian Sands. It was much less successful than Chan's other American films such as the Rush Hour film series, Shanghai Noon and its sequel Shanghai Knights. The film was theatrically released on August 15, 2003 in Hong Kong and August 22, 2003 in the United States by TriStar Pictures.

In the story, Eddie Yang (Chan) is a Hong Kong police officer hired by the Interpol to capture a crime lord known as Snakehead (Sands) and prevent him from kidnapping a chosen boy with special powers and a medallion that gives superhuman power and immortality.

The Medallion provides examples of the following tropes: