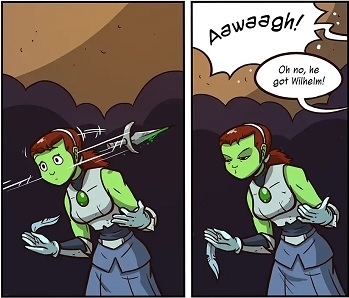 Not even poor Howie was spared.
"Wilhelm's on Mars now? Man, that guy gets around."
— Unskippable
Advertisement:

Overused Stock Sound Effects can screw with a TV viewer's suspension of disbelief — repeated use makes them instantly recognizable to those in the know. One of the worst offenders is the Stock Scream — one of several vocal effects used when a character has to scream and the sound the actor recorded isn't loud or piercing enough. From the popularity of some stock "scream" effects, you would think they were the only ones in existence. Currently there are about 15 commonly used stock screams, most of which have yet to be named.

Looking for an Instant Wilhelm Scream? Look no further

" has been a running joke among sound editors for decades, to the point that whole websites

exist for tracking its appearances, and the Internet Movie Database often includes instances of the Wilhelm in its trivia entries for movies and shows. Some directors, notably Quentin Tarantino, Peter Jackson and George Lucas, make a point of using the Wilhelm in all their action movies. It was recorded for and first used in the 1951 film Distant Drums when numerous Spanish gunrunners and Seminole warriors are shot down at a Spanish fort, and later when the character Pvt. Jessup (played by Sheb Wooley, best known for the song "The Purple People Eater") is attacked and eaten by an alligator

Another famous Stock Scream is the Howie Long Scream

, named for its appearance in John Woo's Broken Arrow, when Howie Long's villain character is kicked through the wall of a train car and falls off a bridge. The scream is believed to have originated from the 1980 film The Ninth Configuration when a biker, portrayed by Steve Sandor, is thrown through a window during a bar fight. Its official name is "Man, Gut-wrenching Scream and Fall Into Distance," note it's available commercially as "Hollywood Edge Premiere Edition, Disc 13, Track 44" (Track 45 is a much less often heard variation of the same scream). It is also sometimes referred to as the "TIE Fighter Scream" for its similarity to the sound of a TIE Fighter from the Star Wars films.
Advertising
Anime & Manga
Films — Live-Action
Live-Action TV
Music
Video Games
Web Original
Western Animation