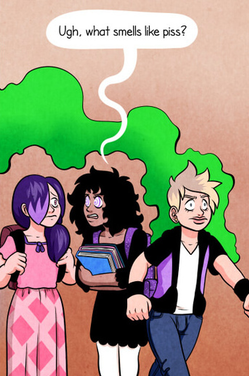 "The only thing strong about the French Army is their damn body odor."
— Dwayne Johnson
Advertisement:

Want to make someone feel bad? Just tell them that your olfactory sense is offended by their presence.

Personal hygiene is important. A lack of self-care in that department can lead to some health issues. As a result, avoiding people who exhibit signs of poor hygiene in the form of a foul odour lingering in the air around them is a perfectly natural reaction.

Compare Adoption Diss, You Are Fat and Your Mom for other themed insults. Note that telling someone that they stink is generally considered more socially acceptable than telling them their footsteps cause earthquakes, implying they're unloved, or disrespecting their parents. When Evil Smells Bad, commentary to that effect amounts to this. When used in visual media (provided the person really does stink and the snubber isn't just being mean), a Visible Odor is often involved.

See also: Humans Are Smelly when this is at least part of a general opinion about the entire species, You Need a Breath Mint for halitosis-specific examples, Dirty Foreigner for when an entire group of foreign people is stereotyped as unhygienic, and The Pig-Pen when the insults are clearly and abundantly true.

Rex complains about the way Cannonbolt smells after Ben uses him to save them both.

Rex complains about the way Cannonbolt smells after Ben uses him to save them both.