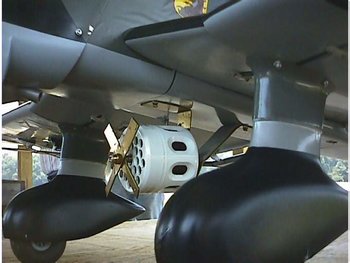 The Stuka-Siren: standard issue on every aircraft in Fiction Land
"Engines are out, steering jets are on the fritz, and someone's fitted us with a Stuka dive-bombing siren!"
— Captain Proton and the Planet of Lesbians

In media, when something — usually a plane, but it can be something else — is diving, crashing or otherwise swooping, a gradually-rising mechanical scream

that climaxes in a distinctive shrieking sound is often applied as a sound effect. This Stock Sound Effect originates from a siren (named Jericho-Trompete, or "Jericho Trumpet"), which was fitted to German Ju-87 "Stuka" dive-bombers in the Second World War as a psychological terror weapon designed to inflict panic on enemy ground forces.

At some point, somebody decided that this would make a great sound-effect for any diving aircraft.

A staple of World War II films, it is by no means restricted to them and can be used in conjunction with anything from a crashing civilian airliner to a wheelchair rolling down a slope at high speed.

Fan Works
A side effect is that Rhaegal produces "a rather unnerving" whistling sound that could be used for this effect, psychological warfare. Rhaegal is dubbed the "Whistling Death".