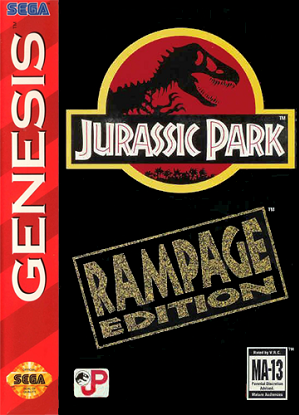 Jurassic Park: Rampage Edition was a licensed Jurassic Park action game with a platform setup for the Sega Genesis, and a sequel to the first Jurassic Park game on that system. However, it basically throws all the rules of the first game out the window. As with the original, the game allows the player to choose between Dr. Grant or the Velociraptor. If you choose to play as Grant, by default you start out with a dart gun that has infinite ammo. But there is a wide selection of weapons available for the player to obtain throughout the game. The variety of weapons in the game include an assault rifle, shotgun, taser, flame-thrower, grenades, rocket launcher, and shock rifle. As Dr. Grant you travel through fighting military type men, possibly private InGen protection, and dinosaurs until you are able to escape the island by boat.

If the player decides to play as the Raptor you win battles with physical attacks such as biting and whipping your tail. An interesting bonus for the Velociraptor is if you collect enough Lysine Cases you are able to go into "Rampage Mode" where the screen turns red and you become invincible for a limited amount of time. As the Raptor you play all the same levels as Dr. Grant allowing you to escape the island by hiding on a cargo boat.

Instead of the linear gameplay of the previous game, Rampage Edition allowed players to choose from three levels to complete before they were allowed to proceed to the final levels in order to win the game.