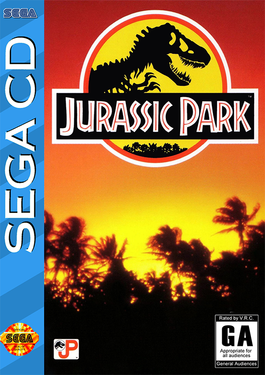 "You are heading to Jurassic Park. Your mission...Find the eggs of seven species of dinosaurs...Take the eggs to the Visitor Center and put them in the incubator. Work fast, you only have 12 hours! You survived the crash...But your life is still in danger!"
— Opening Text
Advertisement:

A video game developed by Sega, this time for the Sega CD, in 1994. Unlike most other Jurassic Park video games at the time, this one was a first-person Point-and-Click Adventure Game that required quick thinking on your part to obtain at least one egg from the seven dinosaur species on the island. Considering all your weapons were non-lethal, this wasn't easy.