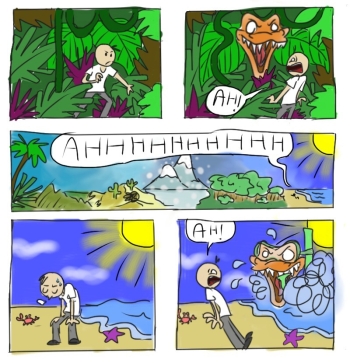 "It can't be bargained with. It can't be reasoned with. It doesn't feel pity, or remorse, or fear. And it absolutely will not stop, ever, until you are eaten alive."
"While I think [the Thanator] was a neat looking creature, it exhibits 'Hollywood super-predator syndrome', and acts like an unstoppable, drug-fuelled, psychotic whirlwind, smashing through vegetation, tearing tree roots up, and altogether doing everything possible in order to kill and eat the object of its attention. It's not even deterred by a barrage of automatic gunfire, and almost pursues Jake right off the end of a cliff (he jumps off to land in the waterfall splash-pool below)."
— Darren Naish in his review of

Our intrepid young adventurers are exploring their new unknown land for whatever reason it may be: money, pursuit of knowledge, or simply by accident (a quest for survival). In any case, they are unaccustomed to the land, but aren't exactly smart about being careful. Namely, they run into some monstrous beast that wants only one thing from them: lunch. After a dangerous escape (someone will probably be killed), the explorers dust themselves off, maybe laugh nervously, and try to get as far away from that thing as possible. No harm done, time to focus on getting to the shelter or something, right?

But wait, what's that sound? Is it following them? Through rivers and mountains and who knows what else?

You bet. Seems like this thing just won't give up until it has another taste of human. No matter how long it goes without a meal. Because Predators Are Mean, even if they are Xenophobic Herbivores.

Basically, this predator will hunt the protagonists far beyond the call of common sense or even instinct, be it through fierce jungles, caves, canyons, or whatever else the protagonists have to go through. Once the climax comes by, the beast will most likely be right there, ready for one Final Battle. If the heroes manage to find shelter, the predator(s) will go through an extreme amount of effort to break windows, unlock doors, or learn to bypass complicated security measures and then bash through a wall anyway to get to its prey. A situation like this might have you thinking that it'd be more productive to just find something else to eat. Sometimes it's explained away by stating that they've got human intelligence, but that just raises further questions about why an intelligent predator would expend so much effort to eat something that keeps eluding them. You might find an ethologist tearfully screaming that nobody, animal or human, would be this vindictively persistent just for one difficult meal.

But there's a reason this trope can work so very well. Note the word human intelligence. "Persistence hunting" isn't only a scarily good hunting strategy, provided the predator has enough stamina to keep chasing until the prey doesn't have the strength to keep running, it's also our strategy, both in hunting and escaping (waiting for the predator to give up), thanks to our genes being arranged to favor stamina over speed. The use of this trope instantly makes the 'dumb animal' a credible threat and Worthy Opponent, since we don't have the option of outfoxing it until it gives up and goes away. No, this is something smart enough to see through our stratagems, that won't fall prey to Attention Deficit... Ooh, Shiny! and stop chasing us, and will continue the hunt even as we tire. It's clearly going to come down to a climactic battle of man vs. nature. Exciting, no?

Amusingly, this is one handwave that often wouldn't have been necessary — it's a well-known fact among biologists that intelligent predators can and will hunt for fun, even if they aren't hungry. For example, dolphins will torture and kill smaller breeds of dolphins as well as band together to gang rape younger dolphins. Orcas have been known to throw live seals around for hours on end, occasionally releasing them once they're done. Oh, and let's not forget about a few humans' habits. Of course, even in those cases, the predator isn't going to put itself through undue hardship and travel vast distances unless the reward is good enough. In particular, avoiding injury from prey is a prime motivation for most all solitary predators (social ones can potentially rely on other members of the group to provide food while they heal), as any inhibiting injury can spell starvation and most won't target something that is notably dangerous (or even pretends to be dangerous, hence why threat displays are so widespread in nature) to dispatch unless they are starving or inexperienced at hunting (and in either case, they won't pose as much of a threat due to poor physical condition or poor decision-making, respectively). "Winning" against prey that manages to break a bone or inflict a wound that gets infected is often a Pyrrhic Victory for the predator and typically avoided for animals that want to have any meals in the future. Animals may hunt for fun but they certainly don't hunt for glory or bragging rights.

In practice, this is the animal version of the Implacable Man. The latter trope also applies if this isn't a regular animal but a robot looking like one sent by a villain, an animal bewitched and sent by a villain, or otherwise someone specifically tasked with chasing the particular victim(s). The inversion is Animal Nemesis (especially in a Moby Schtick setting). Compare Attack! Attack! Attack!, when the animal fights irrationally. Usually happens in places with Everything Trying to Kill You. Biological equivalent of the Spiteful A.I. The entire universe can be like this to The Chew Toy or Butt-Monkey, and more often than not will be to someone unfortunate enough to be Supernaturally Delicious and Nutritious. If this beast appears at the end to chase the villain away, it's Exit, Pursued by a Bear. This trope has nothing to do with Predator, although that one is super persistent, albeit for different reasons.

The predator will attack the protagonists even if they injure it and constantly escape.

The predator will attack the protagonists even if they injure it and constantly escape.