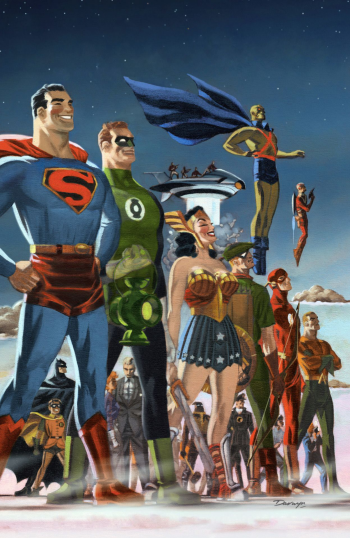 A comic book series written and drawn by Darwyn Cooke, later adapted as an animated film. It ran from 2003 to 2004.
Advertisement:

Instead of reimagining the classic superheroes as they would be today, Cooke created a story firmly set in the 1950s and took the superheroes as they were in The Golden Age of Comic Books and made them believable. Even the art work itself is very similar to comics of that era, with only the layout being modernized. The plotline is broad-ranging, featuring dozens of characters in the DC Universe including Superman, Batman, Wonder Woman, Green Lantern, The Flash, Martian Manhunter, and many more.

Part of this experiment was Cooke trying to figure out a reason why various characters changed in the switch between The Golden Age of Comic Books and The Silver Age of Comic Books. It was easy enough with Legacy Characters like Green Lantern, but Batman went from a dark and menacing figure who wore grey and black into someone more kid-friendly with blue and yellow highlights. In the story, Batman changes it after frightening a child he was trying to help, rather than the criminals he wants to scare.

The story took the paranoia associated with McCarthyism and how it would affect the costumed heroes. "Idealistic" heroes like Superman and Wonder Woman are forced to sign loyalty pacts, while Batman remains underground and outside any government control. Even Wonder Woman starts to ignore "Man's World" and returned to Paradise Island.

Hal Jordan is a fighter pilot for The Korean War who gets shot down, then recruited for a mystery space program. He is soon contacted by a dying alien and given the Green Lantern ring.

The Flash finds himself struggling to remain doing his super-heroics without bending to the will of the government, so he announces his intention to stop being a hero altogether on television.

A scientist's experiment results in an alien being teleported from Mars. The scientist suffers from a heart attack and dies, and the Martian gradually assimilates himself into human culture using his shapeshifting abilities but is ever aware of his desire to return home.

While all these internal struggles continue, a monster slowly descends upon civilization. It has psychic powers that leave miscellaneous people (and the Martian) aware of its existence. As the threat grows in intensity, everyone, both superhero and the government, sets aside their problems to confront this menace as a united League.

The comic was given an animated Direct to Video film adaptation titled Justice League: The New Frontier in 2008, with the voices of David Boreanaz as Hal Jordan, Kyle MacLachlan as Superman, Jeremy Sisto as Batman, Lucy Lawless as Wonder Woman, Miguel Ferrer as Martian Manhunter and Neil Patrick Harris as The Flash. Keith David's baritone voiced the omninous and faceless Centre. The film was produced by veteran DCAU man Bruce Timm and paid strict attention to the comic, lifting the majority of dialogue and scenes from the comic straight into the film. The film is part of the DC Universe Animated Original Movies line.