You Wouldn't Shoot Me 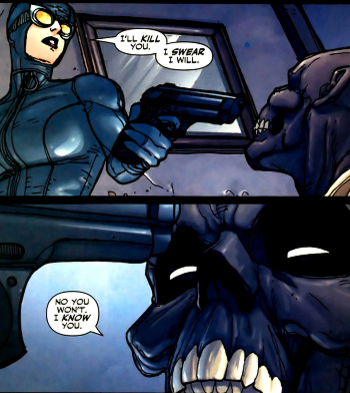 "Popovich's first rule of firearms is pretty simple: The man who tells you he's going to shoot you will not shoot you."
— Salon.com, "The Lear Jet Repo Man

Alice has Bob at gunpoint... and he calls her bluff. Sometimes bravado will make him mock her into the bargain, or even do something dramatic, like step forward and place the muzzle of the gun against his forehead, daring her to pull the trigger.

There are two possible outcomes: Bob's right and the gun wielder is humiliated as he smugly takes the gun right out of her hand — perhaps secure in the knowledge that the safety is on, the gun isn't loaded, or the gun is a harmless prop.

A snappy One-Liner from the gunman is almost mandatory at this point — this counts as Talk to the Fist for the first few versions and Bond One-Liner for the last.

Related to Defensive Failure, subtrope of Underestimating Badassery. Will often result in someone being Killed Mid-Sentence. Compare Kill Me Now, or Forever Stay Your Hand, where Bob is a hero and Alice is an enemy whose nobler side he is trying to reach. Also compare Can't Kill You, Still Need You, where Bob absolutely can kill Alice and would if given the chance, but he needs something from Alice that requires she be alive. Contrast Gunpoint Banter, which is much more lighthearted. Not related to Like You Would Really Do It, which is an Audience Reaction Trope.

It's worth noting that in real life, this is a very good way to get yourself killed.

"Too Much of a Pussy"

In the Dream SMP roleplay, Schlatt mocks Quackity for being too cowardly to shoot him. Quackity responds by shooting Schlatt, taking his second canon life, before leaving the country.

"Too Much of a Pussy"

In the Dream SMP roleplay, Schlatt mocks Quackity for being too cowardly to shoot him. Quackity responds by shooting Schlatt, taking his second canon life, before leaving the country.