Recap / Star Trek: The Next Generation S3E22 "The Most Toys" 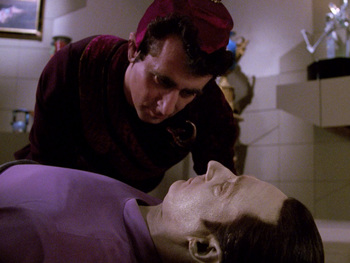 The Enterprise has rendezvoused with the independent trading ship Jovis to acquire hytritium, a rare substance needed to cure a water contamination on a colony world. As Data prepares to depart Jovis in a shuttlecraft with the final load, one of the Jovis crew, Varria (Jane Daly), asks Data to record his thumbprint to verify the shipment. When he touches Varria's PADD, however, he is incapacitated, and Varria has him scanned to determine his component elements. Moments later, the shuttlepod departs the Jovis and explodes en route to the Enterprise, leaving its crew to believe Data is dead.

Captain Picard speaks to the captain of the Jovis, Kivas Fajo (Saul Rubinek), and receives their information on the accident. As Fajo has no more hytritium, the Enterprise is forced to depart with what they have, which they believe will barely be enough.

Data wakes up to find himself in Fajo's personal gallery. Fajo informs Data that the android has been added to his collection of priceless and unique objects. Data states that he has no intention of being held prisoner, and that as a Star Fleet officer its his duty to escape. Fajo boast that he cannot escape the gallery, as the vault door would take years to come through, even with Data's super strength, and when Data then attempts to use said strength to physically subdue Fajo, he discovers that he cannot touch him due to a personal force field specially made to keep androids at bay. Varria informs Data that he must wear a new costume and sit in a chair for display, but Data refuses. Varria warns him that Fajo is capable of great generosity as well as cruelty, implying that she has been the recipient of both. Data surmises that they are both his captives.

As Geordi and Wesley clear out Data's quarters, Geordi can't help but shake the impression that there is more to Data's accident than meets the eye. Picard agrees to allow Geordi to continue the investigation, so long as it doesn't interfere with the upcoming decontamination mission. Worf takes over for Data at Ops. Troi notes that this is the second time he has had to fill in for a late crew member, but Worf insists that he will honor the memory of the lost through his service.

Fajo is increasingly angry at Data's defiance. He dissolves Data's uniform to force him to either wear Fajo's outfit or go naked. Data wears the new clothes, but finds a new way to resist. When Fajo brings Palor Toff (Nehemiah Persoff) over to impress him with his new acquisition, Data refuses to move or acknowledge their presence whatsoever, causing the friend to assume that Data is simply a mannequin. Fajo is furious. He shows Data his Varon-T disruptor and prepares to execute Varria in a horrific way, but Data preempts him by sitting in the chair.

On the Enterprise, Geordi realizes that Data didn't report the shuttlepod clearing the Jovis before the explosion, as he had on his previous trips. As Data always follows procedure to the letter, this is highly suspicious. The Enterprise arrives at Beta Agni II to begin the decontamination process. Picard has a momentary lapse and begins to order Data to initiate a scan, only to have to apologize to Worf. Upon examination of the water, they realize that the tricyanate contamination was artificial. The crew quickly deduce that Fajo was probably behind it. Given that Fajo is a collector of rare objects, Riker suspects that stealing Data was his true goal.

Varria, meanwhile, has decided that she's had enough. She takes the disruptor out of the gallery safe and escorts Data to the shuttle bay. As Data prepares a pod for their escape, Fajo and his men intercepts them, and Fajo uses one of his other Varon-T disruptors on Varria. Seeing her dying in agony makes him toss the weapon away in disgust. But Data picks the disruptor back up and aims it at Fajo, telling him to surrender himself to the authorities. Confronted with this, the collector quickly snaps out of his shock and immediately tries to reassume control of the situation. Scoffing at Data's demands, he reminds him that his programming still instils him with respect for all living beings, and as an android he cannot use rage as an excuse to take a life. Further, Fajo threatens to start killing more people if Data continues to defy him. Data considers all of this for a moment and concludes that Fajo must be stopped before he can kill again. With no non-lethal ways of achieving this, Data decides on a course of action and resolutely raises the disrupter against Fajo. The collector is taken completely off-guard by this, and starts frantically pleading for his life, as Data squeezes the trigger... only for the Enterprise to transport him away just as his weapon is going off, saving Fajo.

As Data is beamed back board the Enterprise, O'Brien mentions to Riker that he also picked up a disrupter discharge along with Data, but he cancelled it out. Data steps off the transport, and tells Riker to see to that Fajo is immediately arrested for murder, kidnapping, and theft. Riker in turn tries questioning him about the disrupter discharge, but Data cryptically dismisses it as something that "must have happened during transport."

Fajo is arrested, and Data pays a visit to him in the Enterprise's holding cell. Fajo comments on how their roles have switched: Data is now the collector and Fajo is the one in the cage. Fajo tells him that he is not beaten yet, and is sure he will one day have Data back in his collection. Data tells him not to count on it, as his entire collection has been confiscated by Star Fleet, and they are in the process of figuring out how to return everything in it to their rightful owners. Deflated by these news, Fajo says that Data must love to see him brought so low, but Data blandly states that he feels no pleasure at this — he is "only an android", after all.